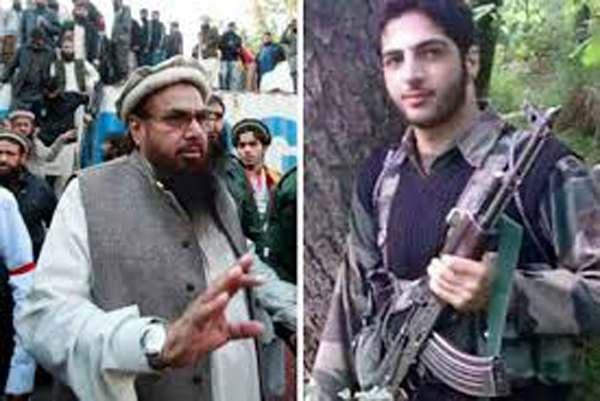 Whosoever decided that release of the taped conversation between   slain militant leader Burhan Wani of Hizb-ul-Mujahadeen and Pakistan based Lashkar’s founding chief Hafiz Saeed  to expose the Pakistan  hand  has done more damage than good to Kashmir situation .

Although it is normal to  release such  conversations in India and other parts  of the world to serve a point  that how the foreign forces were involved in  denting the national authority . In this case, it  also has been done to prove that the whole  militancy in Kashmir is aided and abetted by Pakistan even when the local faces are in the front .

The contents of conversation  suggests that it is the first conversation in which neither side gives  any preliminary introduction , making it clear that both of them were familiar with each other. Burhan’s stressing all along that enemy has to be ousted, “and  Hafiz Saeed offers all support to Kashmiri militants and blessings in regard to arms, ammunition and cooperation in their joint fight against the enemy.”  The  enemy for  both of them is India.

Perhaps, the underlined thought behind the conversation  held days before the  killing  of Burhan, indicates that the social media warrior  and the real terror mastermind in Pakistan were on a path to inflict major losses on India by their joint subversive activities . But then this is  three-decade old story in Kashmir .

The timing of releasing of the video is  extremely bad . In December, the people in Kashmir have started waling out of the siege of shutdowns  and protests , which were pegged  to the  killing of Burhan on July 8 . Burhan was beginning to fade as one of the militants  in Kashmir , though his killing  became a trigger  for live wire ammunition of unrest that had been  piling up for months together because of the anti-India narrative plus the  groundswell of the  local grievances of shortage of water, power, bad roads to the joblessness.

After having  suffered for five months  from the forbidding restrictions , the people had started asking themselves in whispers and even loudly , “was it worth protesting  against the death of a militant who any case was destined to die after he picked up gun?  Has this suffering, sacrifice of lives, limbs, vision of youngsters and  crippled economy and education brought them any closer to the promised “ freedom” by separatists . In their introspection, they have found the answer in negative .

The broadcast has  riveted the attention of the people toward Burhan and his mission  which  had the backing of the deadliest of the terror groups Lashkar-e-Toiba would  infuse a new life into the insurgency that had gone dormant because of the  people breaking the  norm of shutdowns and  protests .  This will encourage the radical elements and  the underlying spirit of resistance will  be back again with a big bang.