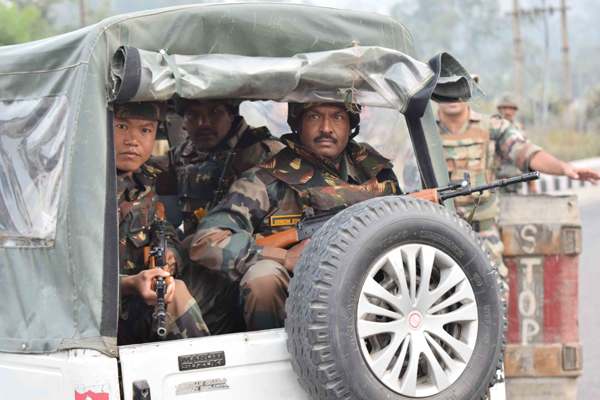 The fidayeen attack at an  army camp in Nagrota, close to the 16 corps headquarters  by terrorists in the early hours of  Tuesday  clearly indicates that the  terrorists had planned their attack well in advance, and  it possibly was not the  assault by the newly intruded group from across the border.

A lot of planning seems to have gone into the  assault that was mounted at artillery field unit in Nagrota , a  mosaic of hills, plains and   jungles with civilian habitation . The time and target  suggests  that  the terrorists had  carefully studied the terrain and the target , weighing all pros and cons  and the impact of the assault on the army camp  at this point of time .

It was neither an ordinary day nor the ordinary attack – the attack in Nagrota coincided with the infiltration bid along the international  border  in Samba sector .  It is too early  to say that the same group mounted the two attacks or there were separate  terror outfits involved in the early Tuesday morning  episode that unfolded at two different places . What appears to be certain these attacks is that both were sponsored by Pakistan where  outgoing  army chief Gen. ( Retd) Raheel Sharif  was  handing over the baton to his successor  Gen. Qamar Javed Bajwa .

The Pakistan connection stems from the fact that the modus operandi of the two attacks   fell into the pattern of previous such attacks in Pathankot  airbase in January , Uri in September, and   Institute of Entrepreneur   Development building  at  Pampore  in February and  October this year .  It was a big strategic mistake  by the Indian establishment  to convince itself that  the September 29th  surgical strike in Pakistan occupied  Kashmir  and the  massive counter offensive to avenge the  beheading of  a soldier in Machil sector  would  shape a new thinking in the  Pakistani mind.

That cannot happen . The trajectory of the India-Pak relations has two  intertwined  connotations – one is  diplomatic and military . Pakistan has an advantage over India  in this regard . It uses less of its army , more of its  strategic asset  terrorism to  bleed India. Diplomatically,  it  wants focus on Kashmir  and the unrest within the Muslim majority region to  take away the world attention from  use of terrorists for achieving its foreign  policy objectives . The world is aware of it,. But the geo-strategic  compulsions  of the powerful  countries  in the West  because  of the geostrategic  location of Pakistan , providing  routes to Central Asia and the Arabian sea , makes them to flinch from any  decisive action against  Pakistan . The Indian  viewpoint gets superseded . The  western concerns  about terrorism hitting India  are subsumed  by their necessity to have Pakistan on their side be cause of situation in Afghanistan and Iran. China has bigger interest because of China –  Pakistan  Economic Corridor . There , India suffers  at the global international level . The advantage is Pakistan .

India will have to fight its own war against terrorism- Pakistan is unchanged , and India cannot allow  Islamabad the luxury  of inflicting thousand cuts on its body .