Amit Shah’s West Bengal mission is to save nation 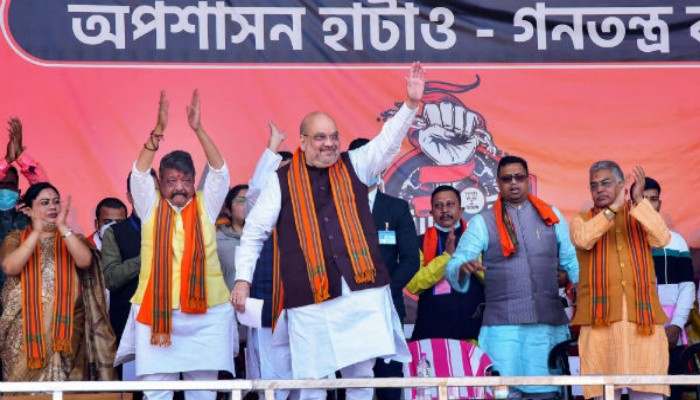 West Bengal and Jammu and Kashmir sit apart from each other by over 2,000 KMs but still what is happening in the eastern state will have its impact in the Union Territory of J&K, as also in the rest of the country.

Many analysts have concluded , and rightly too, that Union Home Minister and senior BJP leader Amit Shah has started his campaign for the forthcoming Assembly elections in West Bengal with a mantra of good governance in the state, where it has been a major casualty . There is a larger message for the country that Home Minister is leading from front to stand up to the cult of violence, anti-national forces threatening the unity and integrity of the country.

It is alleged that the BJP dubs everyone who questions the party’s ideology or narrative as “ anti-national” , but when looked deeper a question arises ,” Whether BJP calls some as working against the interests of the country or there are some ugly incidents and utterances that make BJP to tell them to stay within limits.”

It was an ugly incident of attack on the convoy of BJP national president J P Nadda that , it appears , prompted the Home Minister to take the political fight head on in West Bengal . The underlying, rather clear meaning , is to end the culture of political violence because that poses serious challenge to the nation’s polity and integrity.

Political differences cannot be settled , and should not be allowed to be settled through stones on the convoys of the political rivals.

Democracy has its imperatives , where violence of any kind is unacceptable . Earlier the Communists had started that cult, and thereafter Mamta Banerjee and her party-Trinamool Congress- continued with it . This violence oriented politics is bad for the state , at the same time , it grants legitimacy to those who control the levers of violence because the peace-loving sections get scared.

The problems of growing militant activities, infiltration from across the border are common to Jammu and Kashmir and West Bengal . Therefore, it was important for the country’s Home Minister to take stock of the things and take measures to maintain peace in the region.

Rohingiyas crossing over from Bangladesh to Bengal have been travelling to J&K . They refuse to go back . They have built their own residential colonies and acquired documents of residency.

The problem has travelled from one sensitive place to the other , causing serious security concerns. Someone had to take note of it , and that’s what Home Minister did.

Many may ask, why Amit Shah is weaving these serious concerns into political discourse against TMC , the political group that the BJP sees as a main stumbling block in addressing these crucial issues in a fair manner.

The answer stems from policies of the Mamta Government – one , while it claims that the law and order is a state subject , but when it comes to take responsibility , it allows political violence to go unchecked. Rather, it sets a stage of perennial state versus Centre confrontation . The federalism doesn’t work in a mode of clash .

Amit Shah , as Home Minister of the country, cannot allow this kind of anarchic conditions. So instead of sending message from Delhi , he himself visited West Bengal where he held rallies and roadshows that attracted huge crowds . Essentially, these crowds were named as BJP supporters – so they were and their presence in the rallies and roadshows demonstrated that they saw safety net for themselves and their state in the Centre that Amit Shah represented.

This also delivered a clear message to the TMC government and the people of the state at large that the Centre would protect their right to life and property. This, in turn, is the message for the rest of the country as well, particularly Jammu and Kashmir where also such life threatening situations existed .