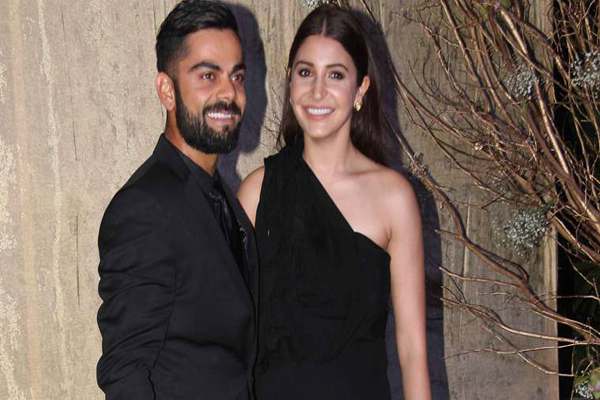 Anushka Sharma and Virat Kohli’s PDA has definitely got everyone talking and why wouldn’t it? I mean, there was a time when the two would refrain from making public appearances together or for that matter had even warned the media to stop focusing on their love life. But now it seems like the two are finally over that phase given that the couple not only took over Yuvraj Singh and Hazel Keech’s wedding with their adorableness but also made sure they arrive in style at Manish Malhotra’s 50th birthday bash last night.

Photos of Anushka and Virat walking hand in hand at Manish Malhotra’s 50th birthday party are doing the rounds on the internet and boy, they look so much in love!! They even twinned by wearing matching black outfits, going by the golden and black theme of Manish’s party. Well, if these pictures don’t speak volumes of how committed they seem towards their relationship then I dunno what will. Especially the one where Virat is firmly seen grabbing Anushka’s hand and leading her straight to the exit. You can call him a protective boyfriend or just someone who can never do without his girlfriend, there’s definitely something beyond love between the two and we’re glad the couple is finally opening up to flaunt it in public

Reminds us of the video of Anushka and Virat having a dance face off at Yuvraj Singh’s wedding a couple of days back. Remember the one on Punjabi’s hit track ‘Gur Naal Ishq’? Well, Anushka and Virat not only look madly in love but also seem to be assuring that they make the most out of this happiest phase of life, love, togetherness. Can we hear the wedding bells? Or is it too soon to be true?