Jayalalithaa’s funeral: Rajinikanth and Dhanush come to pay their respects, ahead of her last rites 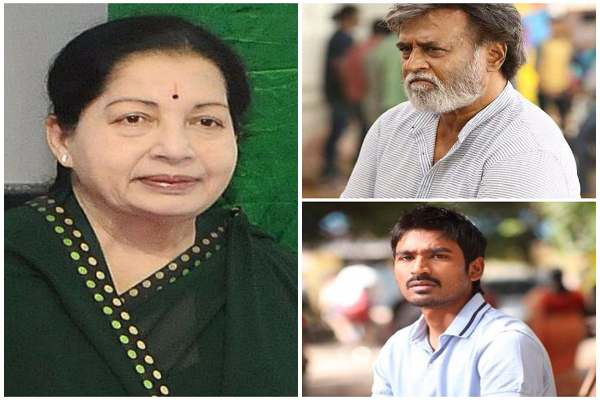 Rajinikanth and Dhanush pay thier last respects to the late CM Jayalalithaa.

In saddening state of affairs, TN CM Jayalalithaa passed away on 5th December at 11:30pm. The CM was suffering a prolonged lung infection and was being treated for it since September 22. Quite recently, the Apollo Chairman had annouced that the late CM’s condition was getting back to normalcy and her vital organs were functioning well. But in a sudden turn of events, Jaya ji suffered a cardiac arrest and was rushed to the Hospital on Sunday night. Despite a surgery and the team of esteemed doctors looking into her health, her condition had been declared grave. Tamil Nadu has lost out not only on a great leader but also a talented actress. Jayalalithaa has contributed immensely  to cinema and to her people. She is truly an inspiration to all. Her followers to whom she is referred to as Amma are paying her their last respects. The world of leaders has become a dimmer place as we lost a great leader.

Celebs across industries have mourned her death – Amitabh Bachchan, Shah Rukh Khan, Dharmendra, Rajnikanth, Trisha, Tamannaah Bhatia, Samantha Ruth Prabhu, Mahesh Babu, Suriya, Ajith Kumar have paid their condolences. This morning, Vijay paid homage to the late CM. And now Rajinikanth and Dhanush pay their last respects to the beloved CM. there won’t be another leader like her again.

As per reports O Panneer Selvam will be declared the next CM but an official announcement has to be made. as of now all schools and colleges will remain shut. The government has declared a 7 day state mourning. No official entertainment will be held this week. For all those who don’t know Jayalalithaa is an actress-turned politican who has been the Chief Minister of TN since 1991. She has also a successful innings in cinema, has worked in 140 films  across Tmail, Telugu and Kannada. So far no untoward incident has erupted pos this tragic incident, credit goes to the security who have managed to maintain law and order even in this grave situation.