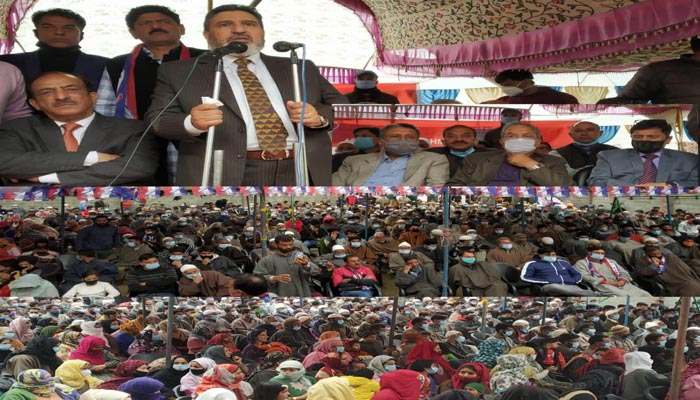 The Party President Syed Mohammad Altaf Bukhari presided over the convention as the Chief Guest and asserted that Apni Party stood against the tide and became the voice of the people of Jammu and Kashmir at a time when all other political parties chose to be mute spectators.

He said that it was Apni Party that voiced the concerns of the general public and tried its best to get the peoples’ apprehensions alleviated at the highest level in the echelons of power in the country.

“Apni Party is a development oriented political platform that has sincerely expressed its areas of thrust since day one. We have always focused on progressive issues and put-in our efforts for the equitable development of Jammu and Kashmir without resorting to emotive sloganeering, as many political parties here are used to,” he remarked.

He said after the abrogation of Article-370, Apni Party stood holding the flambeau of hope and optimism for the people of J&K whereas those who had ruled J&K for decades chose to remain mute spectators to the consequences of the then political developments.

“Those who used to promise the moon to the people for seven decades acted as mere audience to the events taking place after August 5th. Now, when the political atmosphere has turned feasible they are again trying to hoodwink the people,” he said.

Addressing a mammoth gathering at Kulgam, Bukhari said whatever was proclaimed by the Apni Party on the day it came into existence, now appears to be parroted by other political parties as well.

“We have always focused our efforts on tangible issues and as you all can witness that many native political parties are following our suit. This is because hollow promises can no longer substitute the need for redressal of public grievances. The people of J&K are aware about the hoodwinking they have experienced in the past,” he observed.

Moreover, the members from Labour Union Kulgam also joined Apni Party on the occasion and thanked the leadership for providing them with a reliable platform that is proficient in addressing the pressing issues of the general public.

The party members from Kulgam district body along with a large number of local political activists thanked the leadership for visiting the district and simultaneously pledged to strengthen the party at the grassroots level.