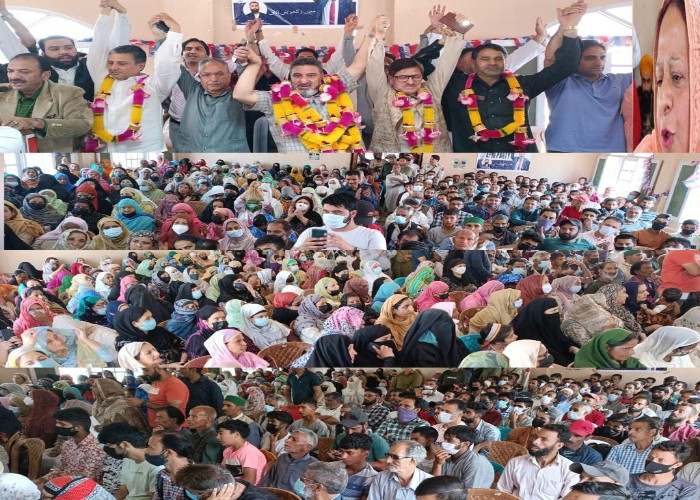 Urges release of the detainees, end of victimization

Apni Party on Monday organized a convention in the Baba Demb area of the city. Besides the party workers, the event was throngebyth men and women, mostly from the Habba Kadal constituency.

According to a press note, Apni Party President Syed Mohammad Altaf Bukhari in his speech reiterated his party’s demand for the restoration of statehood to J&K and political empowerment of its people.

He said, “Apni Party is committed to continually striving for the restoration of statehood to Jammu and Kashmir, and political empowerment of its people. We will not budge from what we have promised to our people. From the day of its existence, Apni Party has been committed to ensuring peace, prosperity, and the development of J&K, and political and economic empowerment of its people.” “We will keep striving for our goals, come what may.” He added.

Extending his gratitude to the participants, Syed Mohammad Altaf Bukhari said that Apni Party is getting public support from each and every corner of J&K.

He said, “I warmly welcome you here. Your presence indicates that like in other parts of J&K, people in Srinagar city have trust in the Apni Party’s unambiguous agenda and its truthful policies. I am pleased to see the people in this city responding to Apni Party’s outreach program enthusiastically.”

He assured that Apni Party will not let down its people and will stick to the promises that it has made to the J&K people.

He said, “Apni Party assures a better future to the people of J&K. We have a clear vision and an unambiguous agenda for a better future for our people. Positive changes might take some time to occur. Nothing happens overnight. But I assure you that we will leave no stone unturned to ensure a better and a dignified future for the people of Jammu and Kashmir who have been grappling with the horrible situation over the past more than three decades.”

He further said, “The traditional parties and their leaders have been deceiving people over the decades by fake promises. These leaders have looted the resources and created empires for themselves and their families. And, they ensured common people remain in poverty and deprivation.”

He said that Apni Party is a people’s party, and it is devoted to guiding and serving the people.

He said, “It was Apni Party that ensured that no demographic changes occurred in J&K post-August 5, 2019. At the time when there was absolute uncertainty and chaos in J&K and people feared that after losing Article 370 and 35A they will lose their land and jobs as well, Apni Party took an initiative and met with the Prime Minister and the Union Home Minister in New Delhi and ensured a guarantee from them that only the J&K people will have their right on the agricultural land and jobs here.”

“We have lost too much due to the protracted conflict and bloodshed over the years. Enough is enough. We cannot afford the further loss of lives and destruction; thus, we need to ensure a peaceful full atmosphere here. Through a peaceful manner, we can achieve everything that matters to the people of J&K.” He added.

Apni Party President reiterated his promise to ensure economic dividends to the people of J&K if the party gets the people’s mandate in the forthcoming assembly polls.