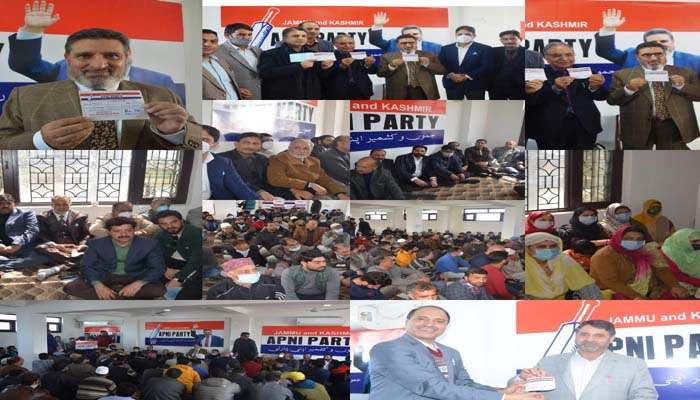 No need of having political godfathers or dynastic legacies behind the new members: Altaf Bukhari

Jammu and Kashmir Apni Party on Thursday officially launched its public membership drive at its office in Lal Chowk, Srinagar. A similar function was also convened at its office in Gandhi Nagar, Jammu.

Party President Syed Mohammad Altaf Bukhari on the occasion urged the people of J&K to join Apni Party on the basis of its performance and resoluteness over the issues that remain central to the aspirations of the people and are imperative for ushering in a new era of peace and prosperity in the region.

“Apni Party came into existence when our identity was diluted. However, our commitment to the people to reclaim our identity shall be materialised and soon the statehood of Jammu and Kashmir will be restored,’’ Bukhari remarked.

He also observed that the achievements over the demands raised by the party during the last one year bear witness to its honest and truthful political approach and the immense support of the people of Jammu and Kashmir.

He said that Apni Party doesn’t resort to any kind of discrimination rather it has always encouraged the young and efficient political activists to come forward and serve the people.

‘There is no room for dynastical politics or nepotistic structures in our Party.  Everyone who is determined to work for the welfare of people can join us. There is no need of having political godfathers or dynastic legacies behind him,’ Bukhari said.

Bukhari at the end of the membership launching ceremony urged the district presidents and other party office bearers to initiate the membership drive in their respective districts and local areas so as to strengthen the party at grass root levels.