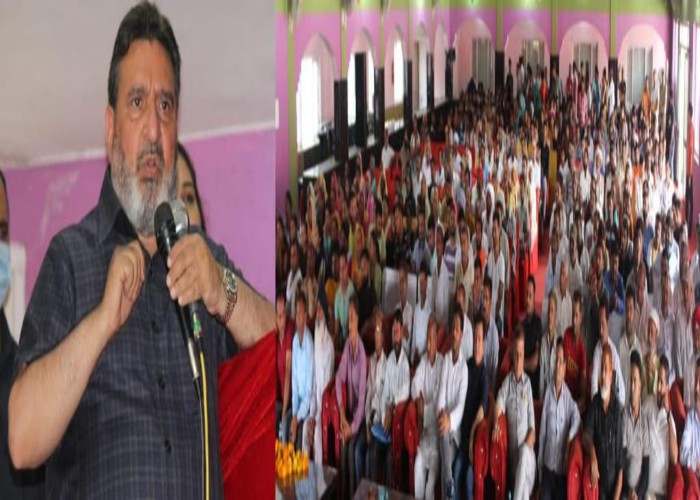 BJP reserved 4th class jobs for educated youth, Apni Party got all Govt jobs reserved for them in J&K

Apni Party President Syed Mohammed Altaf Bukhari today said his Party is committed to end Regional differences and will bring the two communities close to each other for the unity and prosperity of the erstwhile State of Jammu and Kashmir.

Altaf Bukhari was addressing a one day worker’s convention in Hiranagar of Kathua District. The convention was organized by District President Kathua and Ex-MLA Prem Lal.

In his address, he said that the people of both the Regions were betrayed and differences were created for one reason or the other to continue the politics of Regional divide and to harm communal harmony among Hindus and Muslims by the traditional political parties.

“However, the Apni Party will not allow divisive politics. We will fight for the unity of both the Regions so that the people of two communities can be brought together. The BJP and other traditional political parties have spoiled the tradition of brotherhood and Regional tolerance. An atmosphere of mistrust has been created by these political parties for their political gains and we will not allow their agenda anymore,” he said addressing party workers in the jam packed one day worker’s convention at Hiranagar.

He said that the people are fed-up with the unprecedented unemployment, sense of insecurity for jobs and land with the inflow of people from outside the Jammu and Kashmir following the revocation of Art 370 and Art 35A.

“We do not have ample job prospects in private sectors and the majority of youth look for Govt jobs in Jammu and Kashmir. The jobs were protected under the special status which has been removed by the BJP to fulfill its political ambition by implementing its 60 years of agenda of ‘Ek Vedhan and Ek Nishan’ with the revocation of Art 370 and Art 35A,” he said.

He said that, “I want to send a message from here to the Prime Minister of India Narendra Modi that on August 5, 2019 that they revoked Art 370 and Art 35A because it was in their agenda for the last 60 years. However, you should know that the people of J&K would get benefits from the special status in the shape of protection to jobs and lands. But the same is not being protected by the present Govt.”

He said that “The people’s aspirations were not considered but the special status was revoked as it suited to the BJP. However, as the matter is before the Supreme Court, we have hopes with the apex court in the interest of the people.”

Meanwhile, he said that “The jobs were protected for the youth of Jammu and Kashmir only when the Apni Party raised serious objections against the reservation of class-4th jobs for the educated youth of J&K. Our youth is not incompetent. It was after our fight for the rights of the people of J&K the jobs could be protected and reserved for the youth of Jammu and Kashmir. Apni Party wants to protect the future of the young generation, unity in J&K, communal brotherhood, and protection to the land and natural resources of the erstwhile State,” he said.

He said that Jammu people voted the BJP to power but it betrayed them in response even after getting 25 seats in the then Jammu and Kashmir’s Legislative Assembly. Yet the BJP underestimates the intelligence and competence of the youth by reserving class-4th jobs for them.

“It seems the BJP has compromised everything which belongs to Jammu as well as Kashmir for the sake of power. The politics of divide and rule will not be allowed and Apni Party’s cadre will fight it back for the equitable rights of both the Regions,” he said and asked the BJP that the youth of Jammu and Kashmir are not incapable but they are intelligent and competent.

He said that the Jammu people have understood the divisive politics of BJP and other traditional political parties and therefore, thousands of people from different segments of life have joined Apni Party.

He said that Jammu and Kashmir had decided its future with India being a democratic country in 1947 and till date the people are getting bullets on their chests in RS Pura, Samba, Kathua, Rajouri, Poonch, Gurez, and Uri.

“No one else knows patriotism then the people of Jammu and Kashmir as we borders with Pakistan and China. Our people are getting bullets on their chests from the last 7 decades,” he added while launching an attack on the BJP and traditional political parties.

Referring to the exploitation of natural resources, he said that Apni Party will not allow outsiders to exploit the natural resources of Jammu and Kashmir if it comes to power and re-assured about the commitment to provide protection of rights to the people.

He also condemned the downgrading of the historic State of Jammu and Kashmir into a Union Territory and demanded restoration of Statehood. He said that the Apni Party wants to make Jammu and Kashmir a welfare state where everyone’s rights would be protected.

He said that they would also enhance widow / old age pension up to Rs 5000 and also will provide 4 cooking cylinders under Ujjwala scheme to the people of Jammu and Kashmir. He said that the developmental works will be taken up in all the regions and the rural areas will get special attention with regard to the slow pace of their development.

Earlier, Altaf Bukhari expressed shock over the death of three persons including two minors who died in Kathua following heavy snowfall i.e., the minors died in a mud house collapse and another man died in flash flood.