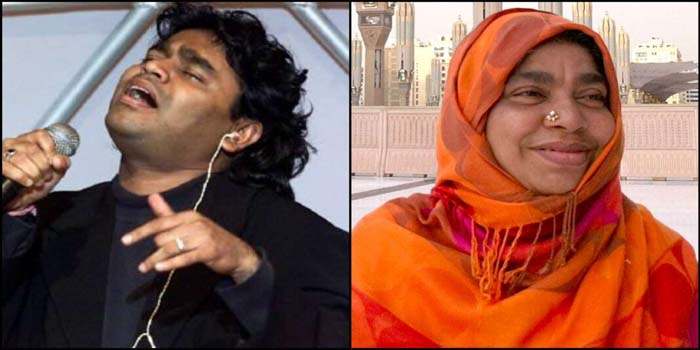 As per a few media reports, Kareema Begum died in Chennai and had been keeping unwell for a while. Rahman did not share any text with his post. His colleagues and friends offered their condolences to the Oscar-winning composer. Singer Harshdeep Kaur wrote, “Dear Sir.. deeply saddened by your loss.. may god give you strength. Remembering Amma’s wonderful and gentle soul. She will forever remain in our hearts.” Shekhar Kapoor paid her condolences, “Our heart is broken, I know. But your mother left you with an inner strength , an inner resilience and belief .. that I have seen and admired for long. Stay strong, my friend.” Actor Khushbu Sundar wrote, “Losing a mother is irreplaceable. The vacuum remains forever. My deepest condolences to @arrahman and his family. May Allah give you the strength to hear the pain. #RIP #Amma.”

“Deepest condolences. Listening to the En aatha Pon aatha – Uzhavan song in memory of her,” wrote one fan of Rahman. “Dear AR sir, your mother was witness to your growth and success as a world renowned music composer. Very sad to know that she is no more. May God give you and your family strength to overcome this loss. May her soul rest in peace ! We share your grief,” wrote another.

Earlier, in an interview, Rahman had talked about how his mother was pivotal in his success. He had also said that his popular patriotic song Maa Tujhe Salaam was actually written for his mother. “I had this in my mind on how to crack it because I was very objective about it, thinking whether patriotism will work or not. So, I was like, forget about the country, let’s do it as a personal song — like singing a song for one’s mother. That’s how it was created,” Rahman.

Rahman recently gave music to Sushant Singh Rajput’s final film, Dil Bechara. He spoke to HT Brunch about the ‘stigma around being a professional musician’. He said, “People always say with pride ‘Oh, my son is a doctor, lawyer, engineer.’ But you don’t find them saying, ‘Oh, my daughter is a musician’, with the same pride. But music gives beauty to people and a sense of peace and security.”

Rajiv Kapoor passes away at 58