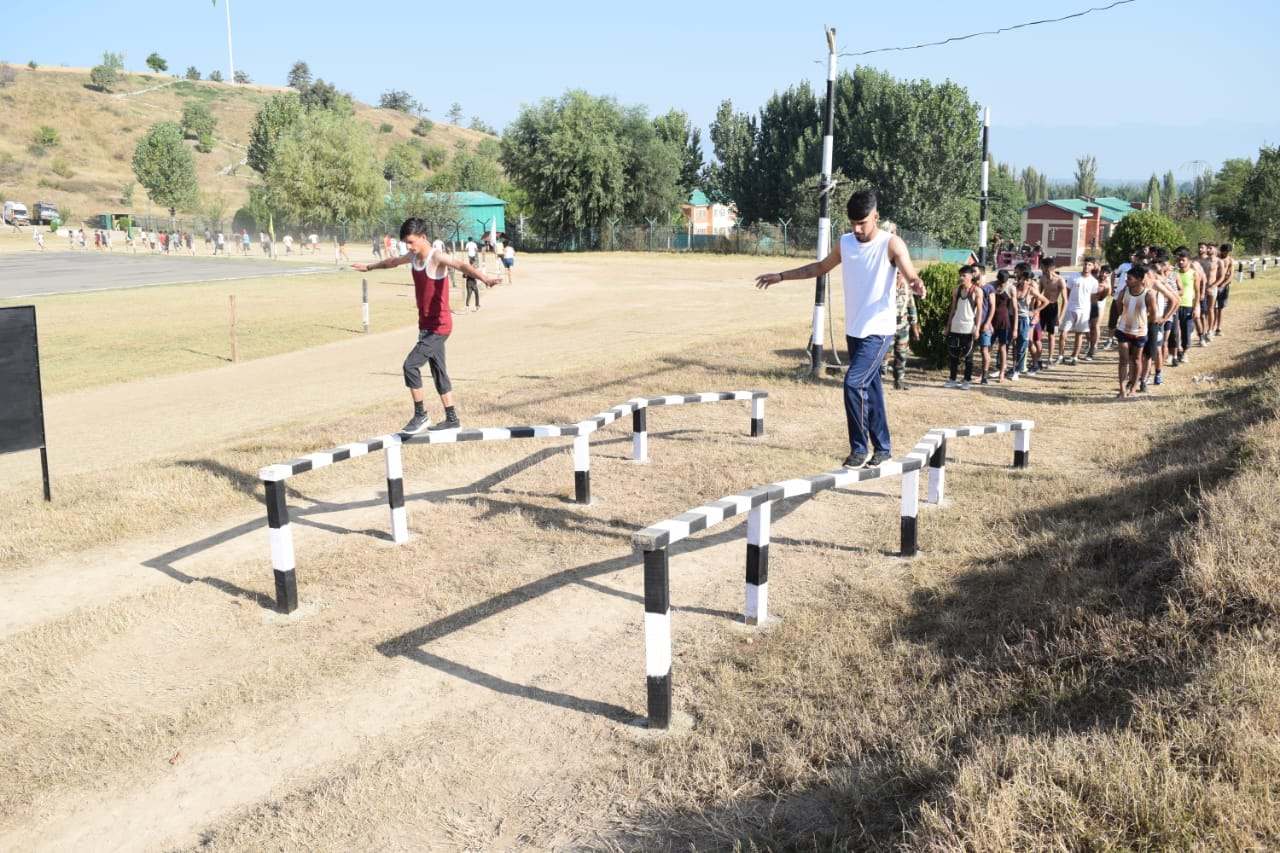 The first ever Army Recruitment Rally in UT of J&K in Kashmir region under the transformative reform of the Agnipath scheme for recruitment of male candidates as AGNIVEERS into Indian Army was conducted at Haiderbeig, Pattan from 17 September 2022 to 29 September 2022 covering the districts of Srinagar, Anantnag, Baramulla, Pulwama, Budgam, Kupwara, Shopian, Ganderbal, Bandipora and Kulgam of UT of J&K and from UT of Ladakh from districts of Kargil and Leh, for categories of Agniveer General Duty, Agniveer Technical Clerk / Store Keeper and Agniveer Tradesmen. Eligible candidates had registered online on www.joinindianarmy.nic.in.The registration for the same was open from 05 Jul 22 to 03 Aug 2022 and overwhelming positive response was received from all over the region. A massive outreach campaign in all 10 districts of Kashmir was undertaken by ARO Srinagar in together with the civil administration. A further boost was provided by advertisements in local, vernacular dailies and english newspapers published in Kashmir and Ladakh. DD Kashmir and DD Leh also provided valuable publicity to the scheme and recruitment drive. AIR Kashmir and AIR Leh also advertised the campaign to increase public awareness.Assistance from civil administration was requested through the Divisional Commissioner, Kashmir, who directed all concerned towards optimizing the efforts towards creating awareness about the scheme amongst the general populace.ARO Srinagar through official channels contacted JKBOSE, JKBOTE, School Education Deptt, SERI, JK Sports Council, in addition to communicating to District Employment Officers, District Level Rally Coordination Committee, Zila Sainik Welfare Boards and NCC Group HQ and Battalions, for dissemination of the details related to the Agnipath Scheme, as well as the current recruitment rally. Screening of candidates was planned district wise, to facilitate their commute to the rally site and smooth return. Civil Administration greatly supported the Indian Army and conducting formation with regard to transport, lodging and food for all outside candidates including those from UT of Ladakh. Candidates were first screened for physical performance by means of a various physical tests. After physical performance, their physical parameters were matched with the requirement of the Army and those found fit were then forwarded for document submission and verification. All candidates clearing the above were put through detailed medical examination by a set of qualified Army doctors, who checked vital parameters of all candidates. Any candidate requiring detailed investigation was directed to hospitals with availability of specialists for detailed medical examination. All candidates successful in their medical examination will be issued an admit card for Common Entrance Exam. The Common Entrance Exam for this year will be held on 13 Nov 2022. Selection of candidates as AGNIVEERS will be based on overall merit in each of these tests and the overall merit based distribution to various arms and services of the Indian Army will be undertaken later.The rally was conducted by Army Recruitment Office, Srinagar under aegis of Headquarters Recruiting Zone (Punjab and J&K) with assistance of civil administration of Baramulla District and Chinar Corps and CIF(K). The positive and forthcoming support rendered by Divisional Commissioner, Kashmir, Deputy Commissioner, Baramulla and Senior Superintendent of Police, Baramulla in terms of security arrangements, medical support by team of government doctors and administrative arrangements for the candidates were the pillars of smooth conduct of the recruitment rally in a scale that was unprecedented in recent times.The recruitment rally was flagged off by GOC, Kilo Force on 17 Sep 22.The Divisional Commissioner, Kashmir accompanied by Deputy Commissioner Baramulla visited the rally ground on 19 Sep 22. Army Recruitment rallies go a long way in meeting the aspirations of youth of the area who wish to join the Army and serve the nation. Unsuccessful candidates were advised to put in greater effort and prepare for the rallies in future. Special emphasis was laid to make all candidates understand that the recruitment process is fully transparent and automated. The candidates were advised not to fall prey to touts and agents. In future, rallies will be conducted for recruitment of women candidates also. Additional details of rallies are available at www.joinindianarmy.nic.in. PRO (Defence) Srinagar