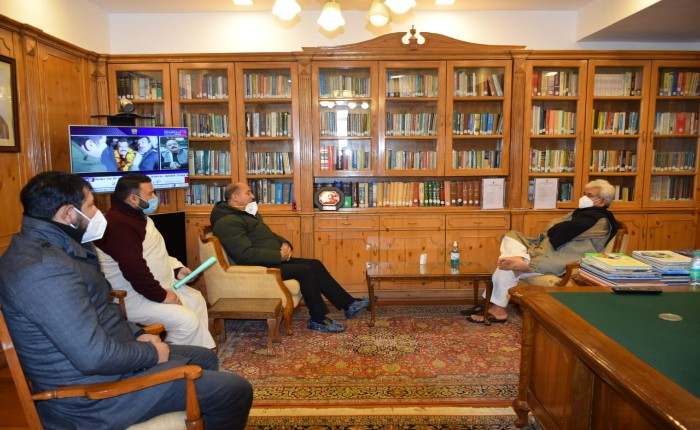 Shaheen also shared his views on various ongoing efforts of the UT government towards improving development scenario in Jammu & Kashmir and expressed hope towards the present administration to meet the developmental needs of the people.

Chairman, J&K RTI Movement, Dr. Raja Muzaffar also met the Lieutenant Governor and submitted a memorandum of issues and demands including establishing a Circuit bench of Central Information Commission in Srinagar and at Jammu to hear RTI related appeals and complaints. He urged to direct for timely updating of data on official websites to make administration more accountable and transparent. He expressed gratitude towards LG Administration for rolling out the Forest Act in J&K besides disusing various other issues of public importance.

Dr. Raja Muzaffar also demanded that all government functionaries at the helm including Administrative Secretaries, DCs, SSPs, SDMs, BDOs, SDPOs, and SHOs be directed to create an official Twitter handle and Facebook page so that people reach out to them without any difficulty.

A delegation led by Chairman, Block Development Council, Keran Kupwara, Mohammad Syed Khoja also met Lieutenant Governor and put forth a charter of demands for the inhabitants of remotest and backward tehsil Keran of Kupwara district. The delegation highlighted various important socio-economic issues related to upliftment and welfare of the backward and underprivileged sections of the society. They also demanded infrastructural development in Keran to provide better essential services to people of the area which is about 180 km away from the summer capital.

Awareness and Impact Ambassador of Paralympic Committee of India, Arhan Bagati, also called on the Lt Governor and discussed the promotion and improvement of the Paralympic Movement in India.

Playback Singer, Composer, and Philanthropist, Saim Bhat also called on the Lt Governor and urged for providing platforms to local youth in reviving Kashmir’s folk music including Sufiyana and Chakri to be presented in the purest form at local, national, and international levels to keep original melody intact.

While interacting with the delegations Lt Governor maintained that the present Government is working with an agenda of equitable and balanced development of J&K and taking all necessary measures to address the concerning issues of the people. He assured the members of deputations that all the genuine issues projected by them would be taken up for their early redressal and urged them to continue working towards promoting the welfare of the people.