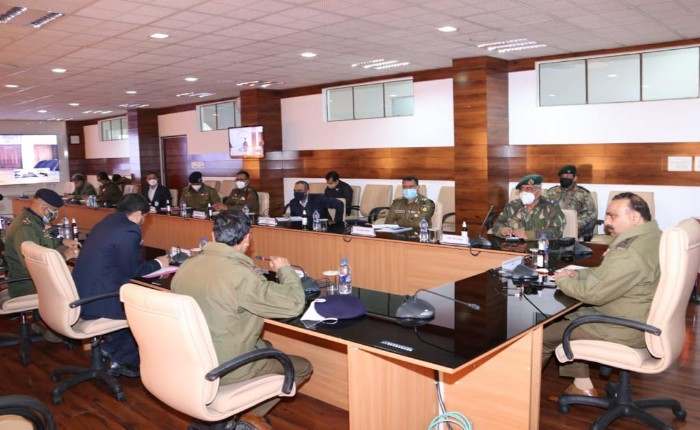 Good work by JKP and SFs appreciated at highest levels; need to consolidate peace in 2021: DGP

To review the security scenario of Jammu Zone and arrangements for the forthcoming Republic Day, the Director General of Police J&K Dilbag Singh chaired a high level security meeting of the senior officers of Police, Army, BSF, CRPF and Intelligence agencies at Police Headquarters here today.

Addressing the meeting, the DGP complimented the officers for the excellent work done during the previous year (2020). He said that the year gone by was very good as far as maintenance of peace, law & order, and counter insurgency operations were concerned. He said that the work done by all the officers and the personnel deserves kudos. He hailed the proactive approach and preventive measures of the JKP and forces which led to the recovery of huge arms and ammunition in 2020 besides eliminating 225 terrorists. He said that the work done by the Police and security forces has been recognized at the highest levels as the Hon’ble Prime Minister Narendra Modi and Hon’ble Home Minister Amit Shah and Hon’ble Lt. Governor J&K Manoj Sinha have conveyed their compliments for the same.

The DGP termed the DDC elections a huge success and added that because of the good work done in the last couple of years expectations for the year 2021 have gone higher and to meet these standards all of the forces have to rise to the occasion with the continued commitment, hard work and dedication. He said that we have to use new year for consolidating peace. He said that all the security arrangements have to be made for the forthcoming republic day and beyond that.

The DGP said that the year 2021 will have its own challenges as new strategies have been adopted by Pakistan with new terror operatives emerging on ground which need to be countered and in that direction the suggestions put forth in this meeting are very valuable. He directed that the deployments for republic day may be beefed up and the QRTs, escorts, guards will have to be alert. He directed that all arrangements be made so that 26th January celebrations are held peacefully. He said that there are inputs that the terrorists are keen to carry out some mischief as they are desperate to disturb communal harmony, peace and order. He directed the officers to take care of vulnerable persons and places to thwart the nefarious designs of enemies.

He said that well coordinated surveillance systems must be ensured to undo nefarious plans of the enemies. He advised the officers to address all the apprehensions expressed by taking adequate measures in the meeting.

IGP Jammu Mukesh Singh conducted the proceedings of the meeting in which all the officers gave a detailed briefing to the DGP with regard to steps taken to strengthen the security measures and for the Republic Day celebrations in Jammu Zone.