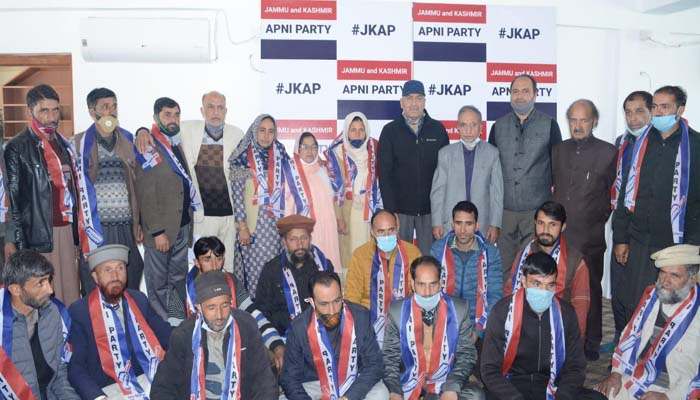 Welcoming the new entrants into the party-fold, Ghulam Hassan Mir emphasized that Apni party has always laid utmost stress on the equitable development of the Jammu and Kashmir wherein all communities, without any discrimination, continue to live in peace, prosperity and brotherhood.

“Apni Party has never played divisive politics rather we have joined the people of J&K into a single bond. Our strength lies in ‘Unity in diversity’ along with putting sincere efforts in alleviating the day-to-today sufferings of the people,” he remarked.

He also said that it is ripe time for the Central Government to restore statehood to J&K so that the democratic process of elections can take place at an earliest.

“The leadership in the Centre must reciprocate with the aspirations of the people of J&K and restore the statehood without any further delay so that they can exercise their right to vote. The region is in dire need of a publicly elected and accountable government,” he observed.

Furthermore, he impressed on the new entrants to work diligently for the public welfare and address their grievances on prompt basis.

On the occasion, the new entrants thanked the Party leadership for providing them with such an imposing platform and avowed to strengthen the party at grassroots level.