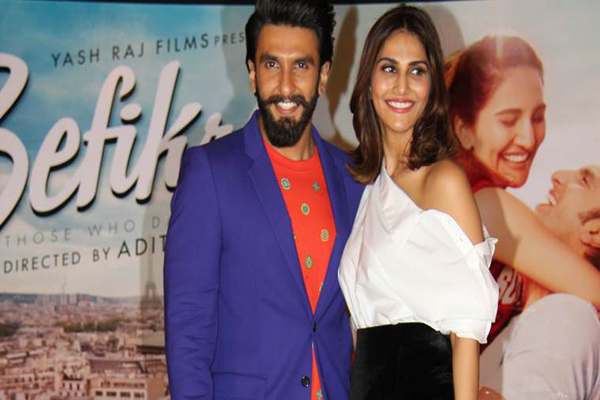 Aditya Chopra returns to direction after a gap of eight years with Ranveer Singh and Vaani Kapoor’s Befikre. Does the film impress? Check out the quick review to find out!

Aditya Chopra returns to direction with Befikre, that stars Ranveer Singh and Vaani Kapoor. Unlike his previous movies, especially Dilwale Dulhania Le Jayenge that catered to the old school romantic in you, Befikre adheres to modern tenets of love. Our critic Sreeju Sudhakaran is watching the film at a multiplex right now and has sent us his first impressions of the film.

Sreeju says, “Befikre starts off with Papon’s song Labon Ka Karobar song that shows montages of kissing scenes of random couples. This gives you what you can expect from the movie, if the trailer didn’t do it for you. As the title goes, Befikre is about what happens when two carefree people hook up.

Interestingly, the movie starts with Dharam (Ranveer Singh) and Shyra (Vaani Kapoor) having a huge fight and later breaking off, especially after Dharam calls her a French slut. Then the movie uses the now-tired technique of using flashbacks how they hooked up an year ago. Dharam a stand-up comedian from Delhi was called in Paris to work at his friend’s club. Shyra is, in her words, a French born to Indian parents. When they start off their lusty hookup, it was all fire and passion. However, a year’s passage cools things up.

Like I said before Befikre is unlike any movie Aditya Chopra has directed before, replete with numerous kissing scenes and both Ranveer and Vaani taking their clothes off at any given time. Going by the college crowd around me, the idea does appeal to them, but the more traditionalists among the viewers might turn their nose up. The first half has lighter moments that show off Ranveer Singh’s goofy charm. And you can bet that it is foremost reason why you are able to breeze through the first half. Vaani Kapoor seems to struggle a bit to catch up with Ranveer’s energy, but her French accent and dance moves are bang on. The clashes between their respective Delhi and French cultures are also interesting to watch. The movie reached interval when both Dharam and Shyra contemplate what’s ahead of their relationship after a year of breakup. Overall a decent first half with a lot of light moments.”