Kangana Ranaut back to take on Deepika Padukone, hikes her fee to Rs 15 crore? 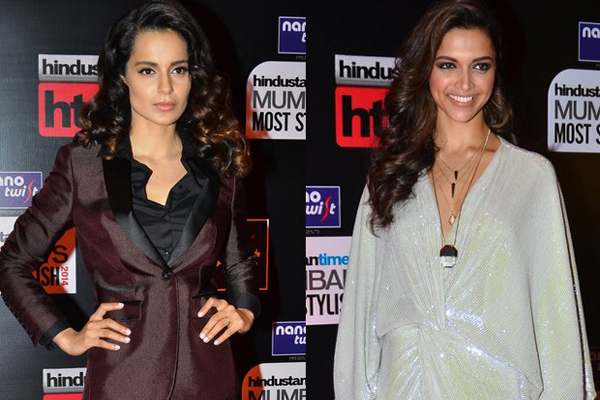 Look who’s back to steal the thunder from Deepika Padukone! At a point in time when everyone’s busy gushing about Deepika and her highs in Bollywood, Hollywood – arch rival Kangana Ranaut is said to be now trying her ways to dethrone Deepika as the ‘Highest Paid Actress’ of Bollywood. Yes! As per a Mumbai Mirror report, the very day it was reported that DP has been paid a whopping Rs 13 crore for Sanjay Leela Bhansali’s Padmavati, Ranaut hiked her fee to Rs 15 crore and has even been quoting the same to a couple of producers. Can you believe it? Dunno how true is this report but if at all Ms Ranaut has really hiked her fee just to outdo DP then well, we dunno what worse is yet in store for this cat fight…

That reminds us how even during an event back in September this year, Kangana had bluntly refused to react to a question based on Deepika being the highest paid actress. Remember how without uttering a single word, Kangana’s straight face had said it all?

While it’s but natural for contemporaries to have insecurities against each other. The Deepika-Kangana cold war traces back a long way, ever since Deepika dedicated her Best Actress award to Kangana but didn’t bother to personally call and compliment her even once. This upset Kangana who then went on to say, “I got genuine compliments from Shah Rukh Khan who called me directly, Salman Khan, Aamir sir called me directly. Amitabh Bachchan also called me directly and even Priyanka (Chopra). Everyone called me, but Deepika never called me.” However, soon after this, Deepika did call Kangana and clarify the misunderstanding. But when Kangana again spoke to the media about the call, Deepika didn’t take it easy. She shot back at a journalist saying, “It was a personal conversation, I don’t know why people are talking about it.”

Following which, Deepika even went on to turn down Kangana’s Tanu Weds Manu Returns screening and the fight intensified. While Kangana made a statement saying, “I did extend an invite to Deepika, but I never got a response. I have always been supportive of my contemporaries and will continue to be, but it is hurtful when you don’t get the same kind of support.” Deepika, despite all the fuss gave an interview saying, “It’s only one-sided. It’s irrelevant. It’s really irrelevant. I have way too much going in my life so what people say, what people do, what people think is really irrelevant.”

The last Kangana was heard talking about Deepika was in reaction to her above statement as she’d said, “Really!! She said that? Then why she makes these desperate calls to paint a parallel reality and sends never ending cunning texts to invite me for her trials and parties? Well, she seems rather invested in the irrelevant stuff.”