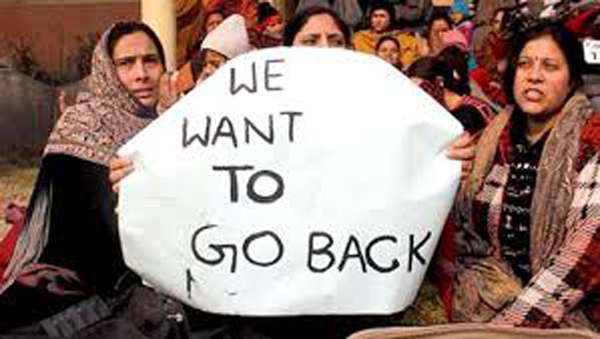 With spike in militants attacks in Kashmir and continuing violence for more than three months, BJP MLC  Surinder Ambardar has said that conditions are not conducive for Pandit employees engaged under Prime Minister Employment package to return back and join duties in Valley.

MLC said that as per the data there are over 1200 Over Ground Workers (OGW) who are helping militants in logistic support and close to 235 militants active in Kashmir this time and under such circumstances no one expect Pandit employees to ‘carry their business as usual’.

“I don’t think these can be considered as conducive conditions for Pandit employees to go back and join their duties. For last three months violent incidents have greatly affected the life of people. Let there be normalcy and then any decision about the employees can be taken”, Ambardar said during a sports meet organised by BJP for children living in different migrant camps in Jammu.

Expressing concern over burning of schools in Valley by miscreants, Ambardar said that there are forces who want to destroy the education sector in valley and situation continues to remain grim.

Nearly 2000 Pandit had returned to valley in 2010, under Prime Minister Employment Package announced in 2008 by then Congress led UPA government. For last six years these employees are living in transit camps constructed at Haal (Pulwama), Vessu (Anantnag), Nutnusa (Kupwara) and Sheikhpora (Budgam) district.

However after the elimination of Hizb commander Burhan Wani by security forces on July 8, rampaging mobs attacked transit camps forcing many Pandits to shift to Jammu. Since then they are protesting in Jammu outside Relief Organisation (Migrant) office demanding adjustment of employees outside Valley in other districts of Jammu region.

“We cannot work in Valley as situation is very bad. There has been several attacks on police personnel guarding minority pickets recently. All of us are concerned”, said Rajesh Raina, who lives in Vessu camp.

Majority of the employees including female say that everything cannot be left to security forces social conditions are also very restrictive. They allege that even in schools they teach are being actively following the separatist narrative, a suffocating environment for people who believe in Indian Constitution.