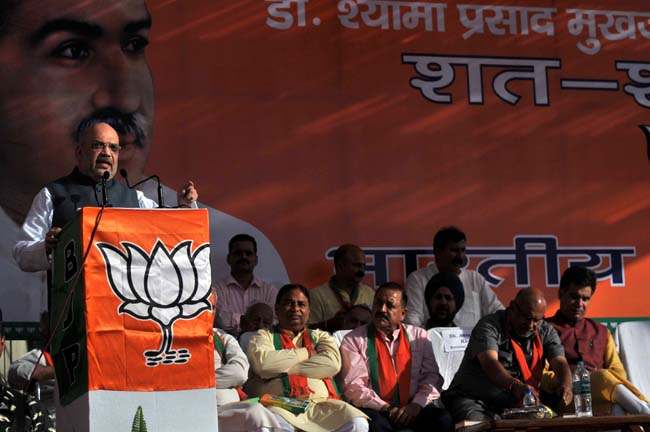 Jammu & Kashmir is an integral part of India and the BJP will never allow it to be disintegrated from the country, party president Amit Shah in Saturday said during his first visit to the state after the saffron party withdrew support from the PDP-led government.

The saffron party chief also claimed that J&K is part of India due to the efforts of Jana Sangh founder Shyama Prasad Mookerjee.

”We will never allow Kashmir to get disintegrated from India. Jammu & Kashmir is an integral part of the country,” Shah told a rally to mark “historic martyrdom anniversary” of Mookerjee.

He said Mookerjee laid down his life to integrate Jammu and Kashmir with the country along with Praja Parishad’s movement.

”It (J&K being integral part of India) cannot not change,” Shah said.

Asserting that Mookerjee is an inspiration for people and BJP activists across the country, Shah said he endangered his life and later sacrificed it in a bid to integrate J&K with India.

”He is an inspiration for us. If J&K is today part of India, it is because of Mookerjee,” Shah said.

He also appealed to the youth of the state to read the history of Praja Parishad.

Earlier, Shah reviewed the party’s preparations and strategy for the Lok Sabha election due next year.

Shah reached the winter capital this morning for a day-long trip.

The Bharatiya Janata Party chief was accorded a rousing reception with party’s youth wing taking out a bike rally from the airport to the state guest house.

Shah chaired the election committee meeting of the party to discuss the issues for the next election, he said.

The top leadership of the party’s state unit briefed the BJP chief about the political situation after the imposition of the governor’s rule.

The leaders have briefed him about the forthcoming programmes of the party in J&K in view of LS polls and also gave him elaborate briefing about the current programmes in the state.