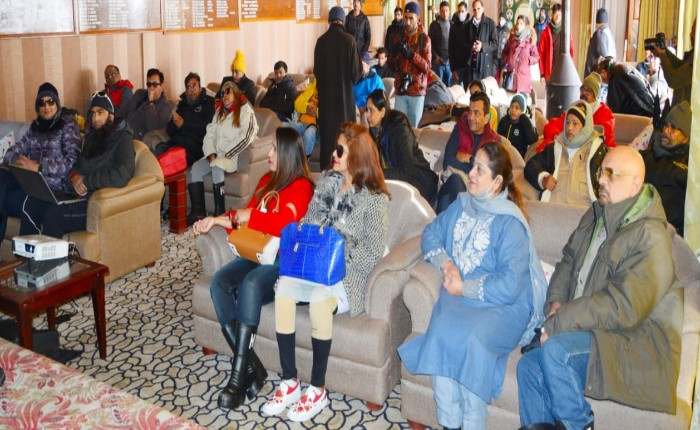 The big banners of Bollywood are on a 4-day visit to Kashmir to explore scenic backdrops for their future film projects.

Soon after their arrival here yesterday, the 24-member delegation of top notch banners and other artists visited Gulmarg today. The team will stay in Srinagar on 29th January and also have interactive sessions with media, travel trade associations and Valley’s film and line producers. They will also be exploring the favourite backdrop locations at Pahalgam on 30th January before departing back to Mumbai.

Director, Tourism, Kashmir, Dr. G N Itoo said the top production houses are here and have visited various locations. “Kashmir has been receiving good response from the Bollywood filmmakers since opening of the tourism here in addition to the country’s regional entertainment houses for shooting song sequences and commercial ads,” said Dr. Itoo.

Dr Itoo said Kashmir is a natural backdrop for the filmmakers and the department has been making it easy for them to get permissions for shooting.
Kashmir has witnessed a steady increase in tourist footfall due to continuous snowfall since the onset of winter.

The Producers Guild praised the pristine beauty of the Gulmarg and expressed keen desire to shoot for their upcoming film projects at Various locations in Kashmir.

Kashmir has been traditionally a favourite spot for the Bollywood who have shot scores of movies here at Dal Lake, Srinagar’s Mughal Gardens, Gulmarg and Pahalgam.