Both Houses adjourned in J&K 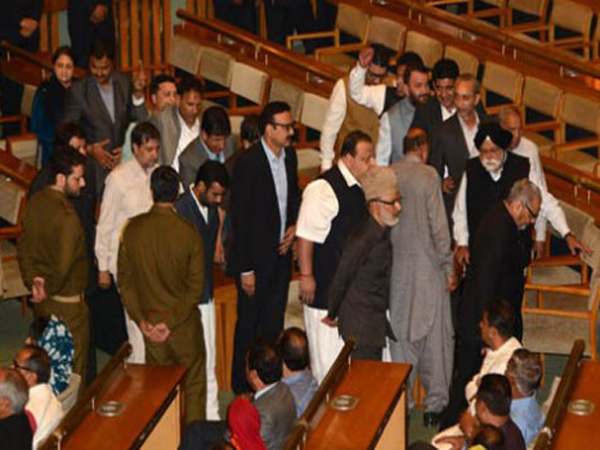 It happened on expected lines when ruling PDP and opposition National Conference were at daggers drawn at each other forcing adjournment of Jammu and Kashmir legislative assembly.

The ugly scenes were seen in the Assembly when Chief Minister Mehbooba Mufti said militancy took birth in the state after National Conference “rigged elections.”

“People who sowed seeds of secession by demanding plebiscite in the state also rigged elections in 1987 to give birth to militancy,” the Chief Minister told the house.

Taking strong exception this remark National Conference MLAs took to their feet and started shouting in the house.

The opposition members earlier walked out of the legislative council during obituary references after creating a ruckus in the house over last summer’s unrest in the Kashmir Valley.

As obituary references were being read out in the upper house of the  legislature, the members from the National Conference and the Congress assembled near the Speaker’s podium.

They shouted slogans against killings of civilians in the valley during the five-month of unrest following the killing of militant Burhan Wani in July.

They also shouted slogans against the use of pellets and PAVA shells by security forces.

Without heeding to repeated requests from Council Chairman Haji Anayat Ali to restore calm, the opposition members finally walked out.