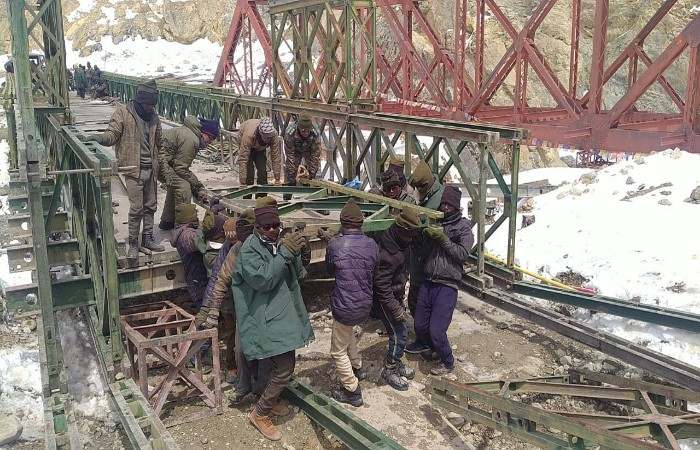 Border Roads Organization (BRO) has in record eight days revamped and upgraded a crucial 110 feet long bridge on the Leh – Sarchu road connecting the cold desert with Manali for smooth movement of heavy convoys of army and civil vehicles.

BRO officials said the crucial Bailey bridge on Whiskey Nallah on the Leh – Sarchu road had deteriorated due to heavy snowfall in winters.

Officials said that  given the significance of the bridge in the region Project Himank of the BRO swing into work from 5 April to 12 amid unfavorable weather.

“The upgradation of this crucial bridge well before the onset of summer will ensure hurdle free movement of heavy vehicles carrying essential supplies and bring cheer to the people of Ladakh,” officials said.

“Since the access to the bridge site was only available after opening of the Leh – Manali Axis, Project Himank immediately swung into action on 5 April for renovation and upgradation of the bridge. We used an innovative method of simultaneous dismantling and construction to ensure uninterrupted move of trucks carrying vital supplies even during the upgradation,” BRO officials said.

“The new bays were joined from one end while the worn-out wooden decking was replaced with latest steel decking for extra strength and longevity,” officials said, adding that workers accomplished the task in record eight days amid icy cold winds and heavy snowfall.

Throughout the renovation and upgradation, BRO ensured smooth move of traffic over the bridge, which was otherwise stranded due to recent heavy snowfall.

Officials said the perseverance and hard work of BRO has gifted the people of Leh with a stronger bridge at Whiskey Nallah with an upgraded load capacity to 50 Tons, thus putting a smile on the face of the truck drivers, who were earlier skeptical while crossing this bridge with heavy vehicles carrying essential supplies.