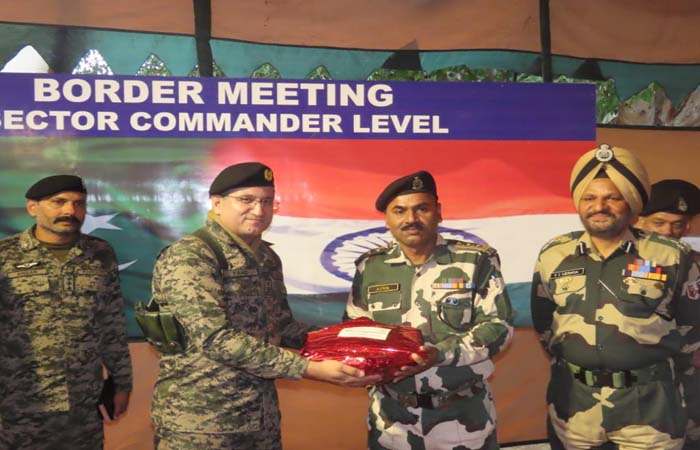 A Sector Commander level meeting between BSF and Pakistani Rangers was held on Wednesday at Suchetgarh border  post to resolve issues as part of consultations mechanism worked out last year.

During meeting commander of both the border guarding force discussed on various border related issues. Main emphasis was given by BSF delegation on the infiltration attempts of Pak based ANEs and recovery of arms & amn and narcotics on international border and other issues related to  border management. A very strong protest was also lodged by BSF commander regarding all these nefarious attempts from across the border by Pakistani elements especially the Arms/Amns & Narcotics consignments seized by BSF in Ramgarh sector on 03 Jan 2022. BSF reiterated that these types of activities from Pak side is unacceptable. BSF also strictly objected to the drone ops carried out by Pak regularly violating the IB. Other issues like construction work by Pak Rangers close to IB, intrusion of IB by Pak elements were also discussed.

A better communication between the field commander to resolve all ops matter was also assured by the both commanders to maintain peace and harmony at international border. Meeting was held in a very positive, cordial and constructive atmosphere. Both sides agreed  to conduct such meetings  at regular intervals for better understanding and to maintain peace and tranquility on border.