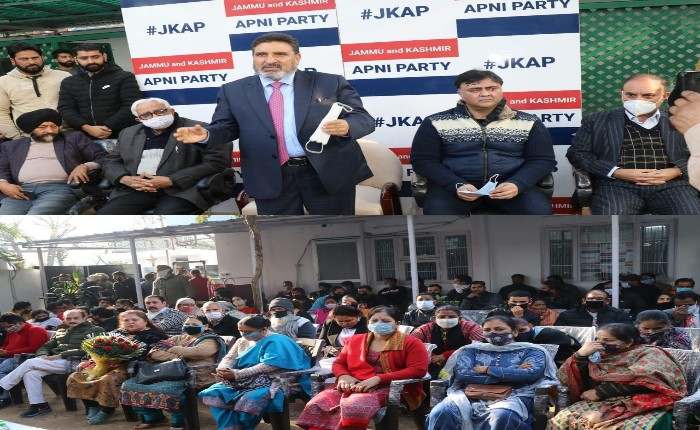 Bukhari was speaking before the active Party leaders and workers at Apni Party Office in Jammu from Jammu East Constituency.

“We founded the Apni Party to bring both regions together after politics came to stand still and the statehood of J&K was also snatched,” the Apni Party President said.

Altaf Bukhari said that two regions have the same demands i.e., restoration of statehood, protection to land and jobs and development.

As far as development is concerned, Bukhari expressed his concern that the developmental activities were going on at a snail pace.

“In absence of an elected Govt, the public issues remain unheard. The administration has miserably failed to perform on ground and the failure of bureaucracy in the delivery system has crumbled the entire system of good governance,” he added.
Bukhari said that the Apni Party came into being to represent the people of two regions without any bias.

“People in both regions have the same demands and sufferings. We have come to serve people selflessly,” he said and again reiterated the demand for restoration of statehood and protection to land and jobs of J&K for locals.

Altaf Bukhari appreciated the local leadership of Jammu and impressed upon them to work for the people.

Meanwhile, speaking on the occasion, General Secretary Vikram Malhotra said that Jammu East Constituency lacks development, and cleanliness.
“The heaps of garbage and poor drainage system reflect the failure of the authorities concerned,” said Malhotra. He said that the unscheduled power cuts affected normal life as well as business activities.

He said that the Party will highlight the issues of public concern for their redressal and the leaders and workers from the constituency work on ground to help the needy and poor people.