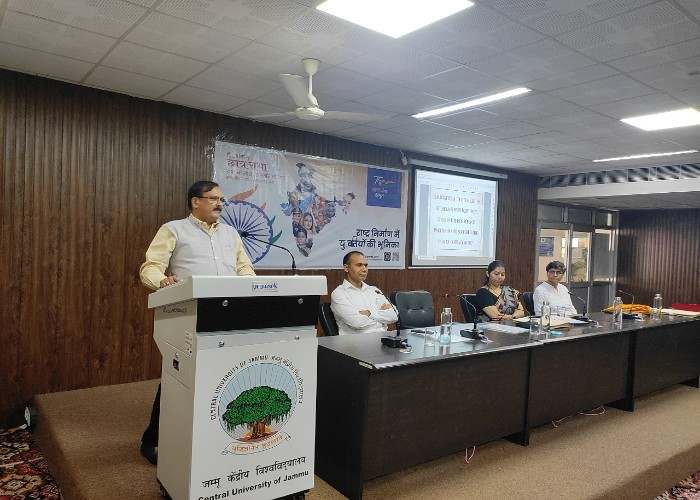 The key speaker ,Shruti Deshpande said  that it is the responsibility of younger generation to transfer our cultural values to future generations She focussed on the contribution of the girls/women towards our Nation. The talk was focused on the theme “the uniqueness of womenhood” and it was discussed that female identity has to be kept intact. Equal opportunities to all genders should be preferred over gender equality. A MOU was also signed between Vishwa Mangal Chhatra Sabha and Central University of Jammu to provide excellent guidance and holistic development to the students. The Vice Chancellor, Central University of Jammu also honoured Ms. Sushma Devi Sambyal, a Social Activist from Village Samba for her remarkable contributionin the area..

Professor Sanjeev Jain, Vice Chancellor of Central University of Jammu in his address mentioned that we should update our knowledge according to the need of our modern society, but we should not forget our culture and values. He also motivated the students to showcase their culture and traditions in the form of poetry, article, chapters that will help in preserving our culture and also help in transmitting it. The whole program was coordinated by Dr Ritu Bakshi Cultural Officer CUJammu.  The programme ended with the vote of thanks by Dr. Vinay Kumar, ADSW,  CUJammu.