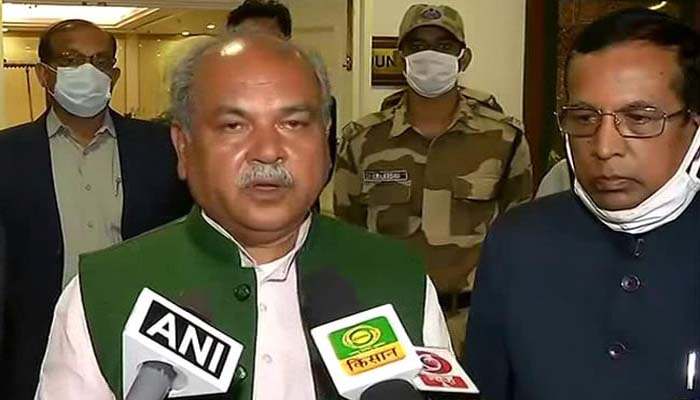 The seven-hour meeting between the farmers and the Centre today failed to end the deadlock over the farm laws, with farmers’ representatives saying that they are sticking to their demands, including the repeal of the contentious farm laws. Union minister Narendra Tomar, who led the negotiations, said the government “has no ego”. The next meeting will be held on Saturday. Farmers had warned that today’s meeting was the government’s “last chance” to call a special session of Parliament and repeal the three contentious laws.

“The government will consider giving more legal rights to farmers. MSP will continue, we have assured farmers of MSP,” Union minister Narendra Tomar said after the meeting. “It would be good if the farmers can call off the protest,” he added.

At the meeting today, the farmers’ representatives made a presentation on the inadequacies of the contentious new farm laws, after which the government gave its views, sources said.

At the lunch break during the meeting, farmers refused to have the food offered by the government. “They offered us food, we denied and are sticking to our langar which we have brought with us,” a farmer leader said.

Sources said the government is firm on backing the laws. But they are considering other possibilities that would help farmers come on board. These could include a written assurance about the continuance of the Minimum Support Price, the biggest concern of the farmers.

The government is also considering farmers’ demand to approach the courts in case of a dispute over contract farming, sources said. Under the current rules, such a dispute can only be resolved by the Sub-Divisional Magistrate.

The farmers’ bodies have been adamant, contending that nothing but the repeal of the three contentious laws will be acceptable to them. Legalising the Minimum Support Price “will not serve the purpose,” they added.

Punjab Chief Minister Amarinder Singh, who met Union Home Minister Amit Shah ahead of the farmers’ meeting, said he requested both sides to resolve the issue “as it affects the economy of my state and security of the nation”.

The Delhi-Meerut Expressway was shut after it became clogged with incoming tractors and trucks on protesting farmers from Punjab. The Chilla border is also blocked for Noida to Delhi passage, though the other side remains open. The National Highway-9, another entry point to Delhi has been closed. The DND flyway to Noida, however, is open.

Farmers are camped out at four busy entry points of the national capital — Singhu, Noida, Ghazipur and Tikri — to press their demands. Farmers from Uttar Pradesh are holding a sit-in protest at the Noida-Delhi border for the third straight day.  In Singhu, farmers who have fever, will be given free Covid tests.