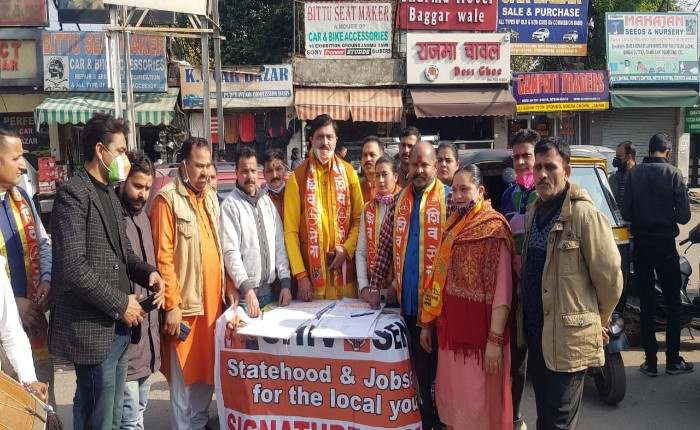 The Centre government’s decision to formally merge the Jammu and Kashmir cadre of civil services with AGMUT cadre brings under question its intention to restore Statehood to the union territory, Manish Sahni, State President of Shiv Sena (Bala Saheb Thackrey) said today, while continued its signature campaign for restoration of Statehood to Jammu and Kashmir, at prominent places across the winter capital. Sahni said that Jammu and Kashmir was declared a Union Territory under a temporary provision on August 5, 2019, with a promise that Statehood will be restored very soon.

However, the Central Government’s recent notification to abolish the Jammu and Kashmir cadre of civil services (IAS, IPS and IFOS) and merge it into the AGMUT (Arunachal Pradesh, Goa, Mizoram and Union Territories) cadre casts clouds of apprehensions on its intention.

“This is the first instance in history that the federal status of a state was snatched away and lowered into a union territory. It seems that if Modi is there, anything is possible .
Sahni appealed to all political and social organizations, to aware and unite the people for their rights.

“Support and participate in Shiv Sena ‘s signature for restoration of Statehood and complete reservation of jobs exclusively for the residents of Jammu and Kashmir so that the voice of public reverberate and reach Prime Minister Hounrble Narendra Modi.