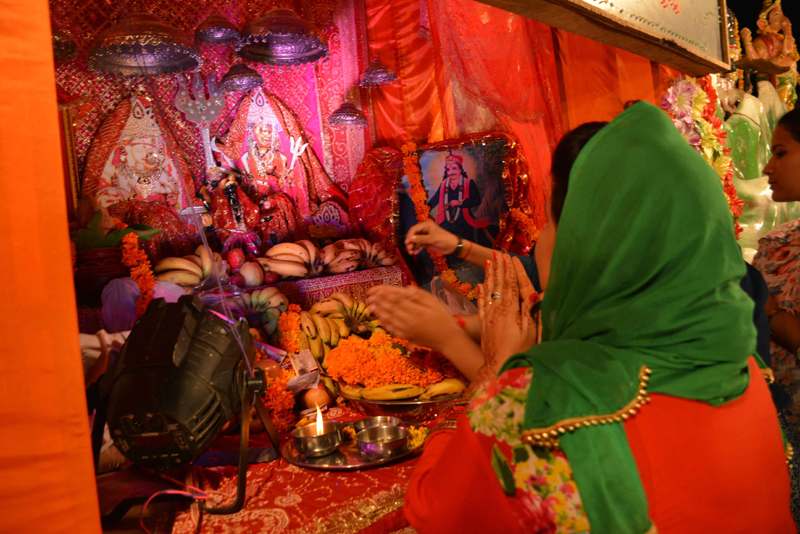 Organized by Shree Chandi Mata Sewa Samiti, Karan Nagar under the aegis of Shree Institute of Education and Nanda Builders, over 5000 devotees from entire Jammu city participated in the jagran and took the blessings of Goddess Chandi Mata.

The atmosphere of jagran premises was charged with the devotion and the devotees offered special prayers for peace and harmony of the state.

Shiva Sagar, ace singer of Punjab, who was specially invited for the Jagarn, surcharged the atmosphere by reciting over dozen Punjabi and Dogri Bhajans of Shiva and Chandi Mata.

His powerful and melodious voice compelled devotees to stand and dance on ‘Bhole di Baraat’ and Jana Ae Machail’.

The music artists from Jammu and Punjab also enthralled the audience with their skills on various instruments. The stage was ably managed by senior TV artist Parveen Sharma.

‘Maa Ka Bhawan’ and stage was decorated with flowers and colorful lights besides proper arrangement of lighting were made throughout the road by artists from Punjab and Rohit from Jammu.

Speaking on the occasion, Suneet Kumar Raina told that the management has been organizing Jagran dedicated to Maa Machail for the wellbeing of humanity and to built mutual coexistence.

He also announced special scholarship for meritorious students and students from BPL families at Shree Institute.

Suneet also thanked district administration Jammu for making elaborate arrangements of power, water and cleanness and security at the Jagran venue and surrounding to avoid any inconvenience to the devote.