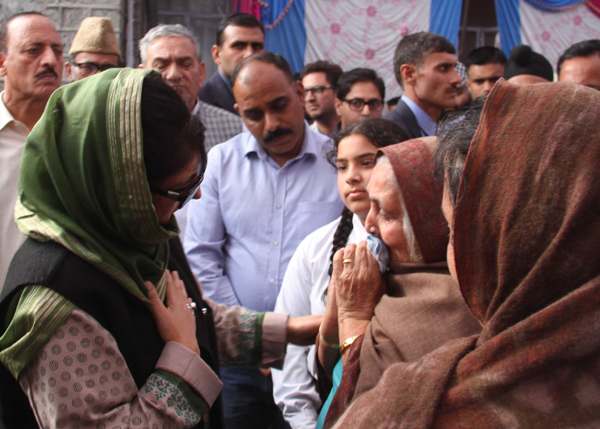 Expressing grave concern over the plight of the people living along the borders and LoC in Jammu and Kashmir, Chief Minister,  Mehbooba Mufti Friday said the intermittent shelling along the borders has triggered a distressing situation in the State leading to loss of lives and destruction of properties on both sides.

The Chief Minister conducted an extensive tour of the areas affected by the shelling along the LoC in Nowshera, Poonch and Rajouri sectors.  She interacted with the affected families and took on the spot appraisal of the measures put in place by the administration to provide necessary support and help to them.

Reiterating the urgency of deescalating the situation, the Chief Minister said,   “there is no alternative to peace and reconciliation and New Delhi and Islamabad should take immediate and effective measures to revive the process of comprehensive and composite dialogue”.

She said that instead of squandering their resources on meaningless conflict, the two countries can be of great help to each other in their fight against the common challenges of poverty and economic deprivation in the region.

Recalling the tenure of former Prime Minister Atal Bihari Vajpayee, the Chief Minister said that due to various internal and external initiatives taken during the period, peace prevailed along the borders and the people living there were happy as the guns remained silent. She added that today again the leadership of our country with a strong support and backing will find a way out as wars do not help address any issue.

Citing examples of war like situations in various countries like Afghanistan, Syria, Iraq, the Chief Minister said that wars have resulted in complete destruction of once most prosperous countries and annihilation of their cultures and civilizations. She said,  “our political leadership did take the initiative to revive the process of reconciliation with Pakistan when Prime Minister, Mr Narendra Modi visited Lahore but then Pathankote happened and everything came to a standstill”. She said it is time for Pakistani political leadership also to reciprocate and consider giving peace a chance in the region.

While interacting with the affected people at Nowshera, Manjakote, Rajouri and Poonch, the Chief Minister expressed deep grief and pain over the loss of lives and damage to the property in the border shelling. She said the Government is alive to the situation and various measures are being taken for the people affected by the shelling.

Mehbooba said that under the new scheme announced by the Government of India next of kin of those who have died in the border firing shall get an ex-gratia relief of Rs 5 lakh. She said the families who lost their cattle will also be compensated under SDRF norms. She also gave away cheques of the initial amount/installment to the next of kins of those who died in the border firing.

In Rajouri, the Chief Minister was informed about the arrangements put in place and measures taken with respect to evacuation of people from the worst affected villages to safer areas in make-shift camps. It was further informed that there are four border zones within 0-5 kms including Rajouri, Manjakote, Nowshera and Sunderbani, covering 59 villages and 68 locations identified for establishment of camps.

A similar meeting was also held at Poonch where in the Deputy Commissioner gave details with respect to Poonch, Mandi, Kirni, and Mendhar sectors. It was informed that at least 60 schools have been identified for establishment of make-shift camps for relocating the people living along the borders. The Chief Minister was also apprised with preparatory arrangements like evacuation plans, medical facilities including emergency healthcare service, availability of ambulances and medicines besides other basic amenities that are required to be provided at such camps. The Chief Minister was also informed with details regarding the relief amount paid to the NoKs of those who have died and those injured in such incidents.