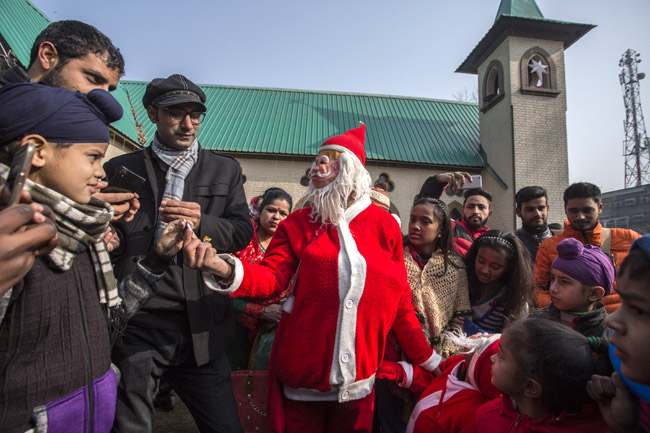 The miniscule Christian population of Kashmir Tuesday celebrated Christmas with traditional enthusiasm and religious fervour as the devotees thronged churches for mass and held special prayers for peace in the valley.

The biggest mass in the Valley was held at the Holy Family Catholic Church at Maulana Azad Road in the heart of the city, where hundreds of Christians, including women and children, assembled to celebrate the birthday of Jesus Christ and held special prayers.

The church was decorated with colourful buntings and balloons.

Among those who prayed were tourists from different parts of the country who joined the locals on the auspicious day and prayed for peace in Kashmir and rest of the world.

Similar prayers were held at other churches in the city, at Saint Joseph’s Church in north Kashmir’s Baramulla, the oldest Catholic Church in Jammu and Kashmir, and at the Church in the tourist resort of Gulmarg.

However, people missed ‘White Christmas’ as snowfall has eluded the lower reaches of the Valley so far.