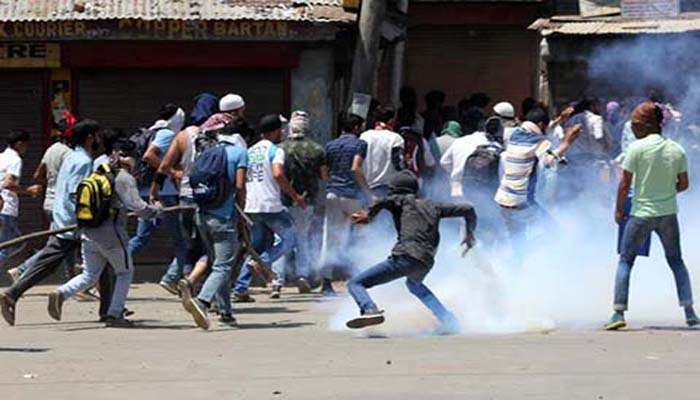 Clashes broke out in Downtown areas on Friday as supporters of Hurriyat Conference chairman Mirwaiz Umar Farooq clashed with security forces against the separatist leader’s house arrest since August 2019 following the abrogation of Article 370 provisions.

Officials said police and other security personnel deployed in the area had to use force to chase away the protestors, but no one was hurt in the action.

Eyewitnesses, however, claimed that a woman sustained injuries in pellet gun firing.

Supporters of the Mirwaiz initially held protests on the Jamia Masjid compound in Nowhatta area, but they poured into the roads after the congregational prayers concluded, the officials said.

Earlier in the day, the Hurriyat Conference condemned the government’s decision not to release the Mirwaiz.

“Hurriyat Conference expresses strong resentment and regret that after announcing the release of it’s chairman and Mirwaiz-e-Kashmir Umar Farooq from a 20-month-long house detention since August 2019, government authorities went back on their decision,” a Hurriyat spokesperson said.

On Thursday, a close aide of Umar Farooq had claimed that curbs on the movement of the Mirwaiz had been lifted. The administration, however, neither confirmed nor denied it.

The spokesperson on Friday also claimed that police officials visited the Mirwaiz late Thursday night to convey that he would continue to be under house arrest and will not be allowed to go to the Jamia Masjid for Friday prayers.

“Since early morning, additional forces have been deployed outside his house and in the area,” he alleged.