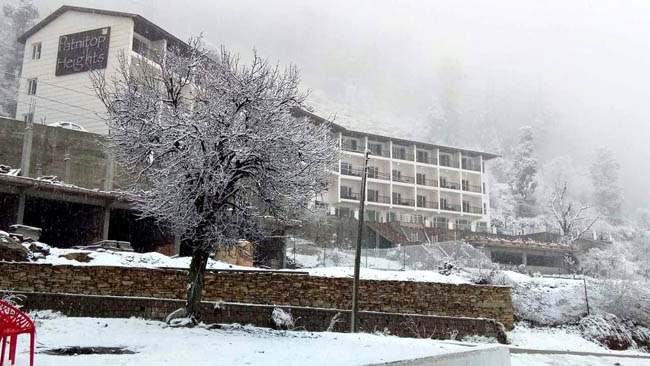 The Jammu-Srinagar National Highway, the only all-weather road linking Kashmir with the rest of the country, also remained closed for the second day owing to the continuous snowfall along the Banihal-Qazigund stretch including Jawahar Tunnel where an avalanche also struck around 0425 hours, blocking both tubes on Qazigund side, the officials said.

Snow accumulation of one to five feet was reported from higher reaches but there was no report of any damage, the officials said, adding district authorities have advised people to avoid slopes due to threat of avalanches and also clear accumulated snow from rooftops regularly.

They said the authorities also announced closure of schools for the day in Kathua and Udhampur districts as a precautionary measure.

The incessant rains triggered landslides at several places between Banihal and Ramban along the 270-km Jammu-Srinagar National Highway, the officials said, adding the clearance operation would be started once the weather improves.

They said the Jammu-Kishtwar Highway and Doda-Assar road were closed, while dozens of other roads linking far flung areas in Reasi, Doda, Kishtwar and Ramban districts were closed following the heavy snowfall.

In Reasi district, a police official said five feet of snow had accumulated in Gulabgarh and adjoining areas, while it was two feet in Tuliwan, Balankote and Chasana.

There was two inches of snowfall at the cave shrine of Mata Vaishno Devi in Trikota hills.

Four feet of snow had accumulated at Goo, three feet at famous hill resort of Patnitop, two feet in Banihal, one feet in Bhaderwah, seven inches in Gandoh and one-and-a-half feet in Kud, the official said.

A spokesman of the MET department predicted significant improvement in the weather from tomorrow.

Heavy rains lashed Jammu and other plains for the third day Tuesday, resulting in considerable drop in the mercury especially in the day temperature which slipped several degrees below normal during this part of the season.

The minimum temperature in Jammu fell by 3.2 degrees to settle at 8.7 degrees Celsius compared to the previous night’s 11.9 degrees Celsius, the MET spokesman said, adding the City of Temples recorded 43.7 mm of rains during the past 24 hours till 0830 hours this morning.

The day temperature in the city dropped to 13.2 degrees Celsius 5.6 degrees below normal during this part of the season on Monday owing to incessant rains, he said.

The spokesman said the highway townships of Banihal and Batote witnessed sub-zero night temperature at minus 0.1 and minus 2.1 degrees Celsius, respectively, while the snow-bound Bhaderwah town in Doda district recorded a low of minus 0.2 degrees Celsius.