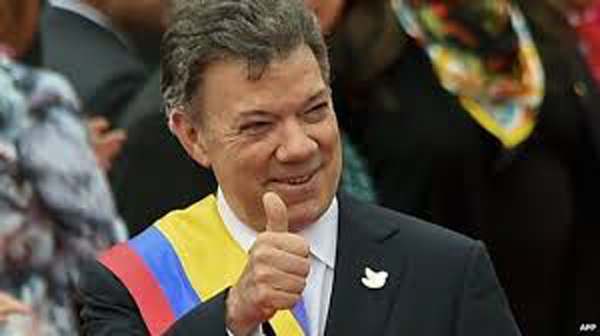 BRUSSELS – Colombian President Juan Manuel Santos was awarded the Nobel Peace Prize on Friday for his efforts to end a half-century of civil conflict in his nation, despite Colombian voters’ shock rejection of the peace deal just days ago.

The Norwegian Nobel Committee said it made the decision because of Santos’s landmark efforts to close one of the world’s longest-running conflicts — Marxist rebels battling government forces since the 1960s.

But the award was a surprise because of the uncertainty over whether peace will hold following a Sunday vote that rejected the deal. Many Colombians see it as too generous to the militias of the Revolutionary Armed Forces of Colombia, or FARC.

“I receive this award in their name, the Colombian people, especially the victims,” Santos said Friday. “We are very close to achieving peace.”

The Nobel Committee said that it was conscious that peace efforts were endangered.

“There is a real danger that the peace process will come to a halt and that civil war will flare up again,” said Kaci Kullmann Five, a former Norwegian politician who is now chair of the Norwegian Nobel Committee. “We hope it will encourage all good initiatives and all the parties who could make a difference in this process in Colombia.”

Among the surprises of the award was that it was offered to Santos alone, rather than to also include his partner in the peace efforts, the leader of the FARC rebels, Rodrigo Londoño, who goes by the alias Timochenko.

Londoño on Friday said that he remained committed to peace.

“The only prize we aspire to is #PeaceWithSocialJustice for a #Colombia free of paramilitary violence, revenge and lies #PeaceTakeTheStreets,” he wrote on his Twitter account.

The FARC leader was never considered as strong a candidate for the award as Santos. Like other guerrilla commanders, he is wanted in the United States on drug trafficking charges, and leads a rebel army that the United States and Colombian governments consider a “terrorist” organization.

Timochenko has only been a visible presence at the talks in Havana since last year, and negotiators say he typically prefers to delegate responsibilities to his negotiating team.

Norway and Cuba served as “guarantors” to the peace negotiations with the FARC, essentially playing a mediator role in the talks.

Santos won broad international backing for his effort to end the war, from the United States, the United Nations, the European Union and the Vatican. Former Beatle Ringo Starr even recorded a song for it.

But it appeared to make little difference in Colombia, where Santos’s popularity is significantly lower than it is abroad. With Colombia’s economy slowing and crime on the rise, Santos’s presidential approval ratings has slumped into the 20s in recent months. His opponents were able to defeat his peace deal Sunday in part by making the vote a referendum on his presidency.

“The award should also be seen as a tribute to the Colombian people who, despite great hardships and abuses, have not given up hope of a just peace,” Kullman Five said, reading a statement from the Nobel Committee in its chambers in Oslo.

The 52-year-old war has killed 220,000 people and displaced 7 million. Santos called for last Sunday’s referendum expecting an easy ratification of a years-long peace effort. Instead, he lost by a razor-thin margin of 50.21 to 49.78 percent, throwing the deal into uncertainty.

The pursuit of a peace deal with the guerrillas “was a deeply personal conviction for him,” said Pilar Calderon, who worked closely with Santos as his communications director for two years, until April.

She said the award was a recognition of “his tireless effort, that hasn’t stopped even the moments of greatest uncertainty,” including the stunning defeat of the accord at the polls on Sunday.

Calderon said she expected some in their deeply-polarized country will say Santos’s long campaign for a pact with the rebels was motivated by personal “vanity” and a kind of prize-chasing.