Students in Kashmir have started returning to school, in trickle 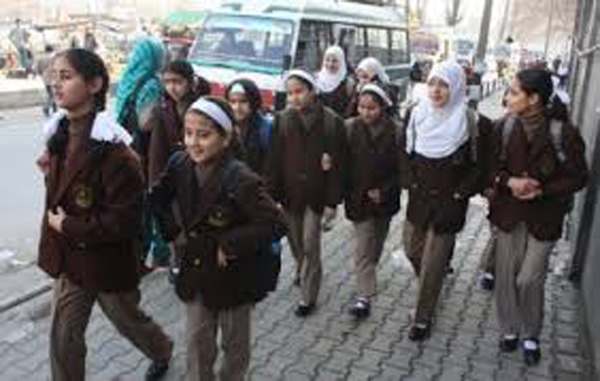 Something  is happening  beneath the  all too visible protests and shutdowns , students have started attending schools in preparation for the  examinations and to save their academic year.

The response has been “ encouraging”, given the  strike call ,  and the overall atmosphere of fear of stone throwing and uncertainty in the air.

Schools reverberated with the noises of the students and their classrooms came alive  after the government issued the notification for examinations. It   helped parents and civil society to unshackle  their children from besieged  atmosphere.

According to official sources, these schools were operational in some parts of the Valley and  slightly close to 1.80 students have attended their  classes  in the past three weeks. The number of students may be less as compared to the overall number of 15 lakh students registered with government and private schools in the Valley, yet the  spirit exhibited by the students is morale-boosting and a wake up call for other students.

A number of protests were recently registered outside press enclave near Lal Chowk in Srinagar and reports of sporadic protests were also received from many towns last week.

On the other hand the attendance in schools also gained momentum which is largely attributed to the civil society and educationists paying a serious heed to issue for saving the educational year of students, the initiatives taken by local administration served as icing on cake. A group of students also lodged protest at Srinagar yesterday against the closure of schools and appealed the separatists also refrain from including schools in the ambit of prolonged strike as around 3 months have already been lost in the ongoing strike.

Interestingly, the figures of students attending schools have swollen over a week. On 1 October 2016 as many as 1.49 Lakh students attended classes across 8 districts as no school was reportedly opened in Bandipore and Paulwama districts.Three days later, on October 4, the figure was touching 1.80 Lakh.

However, situation remained grim in Districts Srinagar, Pulwama and Bandipore compared to other districts. Apart from this number in Government schools some private schools in Kupwara, Baramulla, Anantnag, Kulgam and Ganderbal are also opening slowly owing to the tremendous pressure of parents. Private schools under CBSE have already issued their schedule for annual examinations.

As per the reports available, 1,78,953 students attended classes on October 4 which is roughly 40-45% attendance compared to 70-75% attendance during normal times. Kupwara registered highest number of students on the day with 44,291 students in classes followed by 37960 in Budgam, 32408 in Baramulla, 27,600 in Kulgam and 24341 in Anantnag. However, attendance some key districts remained dismal with Srinagar having only 183 students in classes againt an enrolment of around 39000, the figure in Pulwama was 851, Shopian 1675 and Ganderbal 4306. Bandipore had 5338 students attending classes. On the said day, 39460 teachers remains present in Schools which is around 65-70% of teachers on rolls apart from supervisory staff and those on various kinds of leaves.

A group of around two dozen students yesterday lodged a protest against the closure of schools and raised slogans against deprivation of education in the ongoing strike. The protesting students also staged a sit-in at polo view and demanded establishment of a mechanism to ensure proper classes in school. This protest is also seen in response to continued sporadic protests against examination in some areas. In a handwritten statement they expressed resentment for education being dragged into controversy and called for united efforts to spare education from any form of politicisation by any quarter.

Educationists, however,  termed students coming to streets for protests at a bad sign for education and called for a consensus among all stakeholders to address the issues and concerns related to future of students and also restraining from any political mileage aimed to be drawn from the discourse.

It is pertinent to mention here that various reports have quoted migration 10,000-15000 students from Kashmir valley owing to no let up in situation after prolonged shutdown calls and restrictions.

Separatists have  suggested that the “ government was using coercive methods, asking children to  attend schools and appear in examinations without creating an enabling environment.”  National Conference took the plea that since  the schools have been closed for so long and the students didn’t get time to study, asking them to appear in examinations was “ irrational”.

Pondering over the situation, it becomes clear that who  all have stood up  for and against the education . The students, themselves have started showing the way.