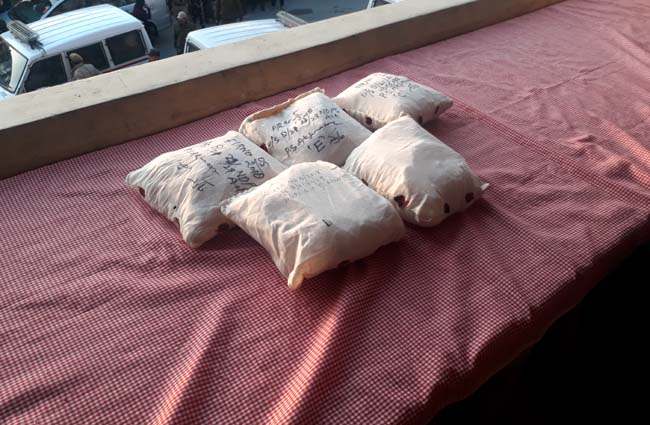 Police informed that a special drive against drugs launched by Jammu Police, on January 4 while on Patrolling duty at old steel bridge Akhnoor stopped a white colour maruti no JK21/0789 which was coming from Akhnoor towards Jammu. Instead of stopping the Vehcile, driver accelerated his vehicle and tried to escape but the alert police party halted the vehicle and over powered the driver. A driver along with co-passenger were sitting in the Car.

The accused have been identified as Mohd Rafiq of Badori Raya and the Co- Passenger disclosed Som Nath of Fatehpur Brahamna in R S Pura. During The search of Mohd Rafiq one Packet of Heroin like Narcotic  material which was stamped Pak -Afghan Nanghar 8888 in Urdu was recoverd from his possession.

Both the persons have hidden the heroin like material below the Jackets worn by them. On this FIR No 05/2018 U/S 8/21/22/29 NDPS Act stand registered at Police station Akhnoor.

During the sustained interrogation of the two accused it was revealed that there is nexus of cross border gang of Narcotics Smugglers. On questioning of the two, three more persons Jabar Singh @ Sunny of Ward No 4 Khour, Jankar Singh @ Gosha of Phariwala Khour and Raju Singh @ Raju of Dhar Khour.

On their discloser five (5) more Packets of heroin like substance weighing one Kg each were also recovered from their possession making in total seven (7) Kg.