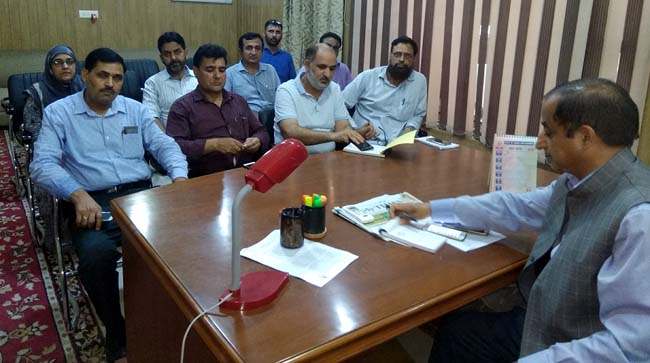 Custodian Evacuee Property Jammu and Assistant Executive Engineers, besides all Deputy Custodians and Field Inspectors were present in the meeting.

On the occasion, the Custodian General directed the officials of Evacuee Property Jammu to work with honesty and dedication for protection and safeguarding the Evacuee Property. He said no indiscipline or dereliction of duties on the part of officers/ officials shall be tolerated.

While addressing the officials, the Custodian General reiterated for retrieval of illegal occupation/encroached land on priority besides to notify the structures under the relevant provision of law, wherever raised by the occupants illegally. Field Inspectors were directed to retrieve the illegal occupations/encroached land under their respective jurisdiction and submit the progress of the same on weekly basis.

Custodian General directed concerned officials to invite e-tendering in respect of projects already approved by the Administrative department for execution during the current financial year, besides to obtain requisite NOC’s from concerned department/agencies, so that projects will be completed in a time-bound manner.