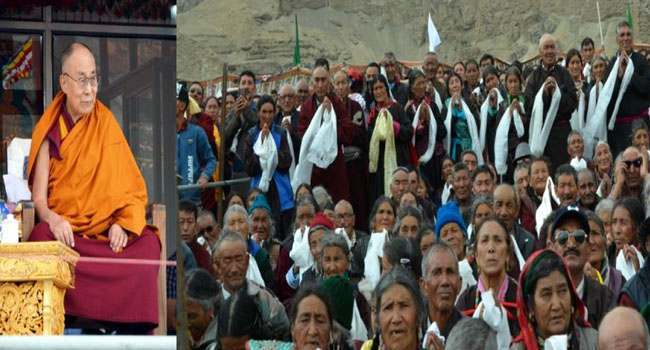 While terming the 21st century as the century of dialogue, Buddhist spiritual leader Dalai Lama called for collective efforts to minimize discords and disagreements through the process of dialogue and reconciliation.

He was addressing a huge gathering of devotees during his religious sermon at Spring Dales Public School Mulbekh here today.

The Dalai Lama said that a peaceful and prosperous world is not possible by physical and material development alone, but the need of the hour is to promote moral and spiritual development to bring positive changes in people’s lives.

He said that basic human nature of compassion and warm-heartedness towards fellow human beings is the only solution to all violence and discontent. He said that every religion teaches self-discipline, compassion and love and urged upon people to adhere to the religious norms by heart and soul so that they are able to lead the path of piety and righteousness.

The Dalai Lama said that every religion has the potential to produce sensible and compassionate human beings adding religion is the key source of inspiration to human beings that holds our hope in testing times.

Meanwhile, the Dalai Lama while expressing concern over rapid climatic changes due to global warming urged upon people to contribute their bit in minimizing pollution levels to keep their environment clean.