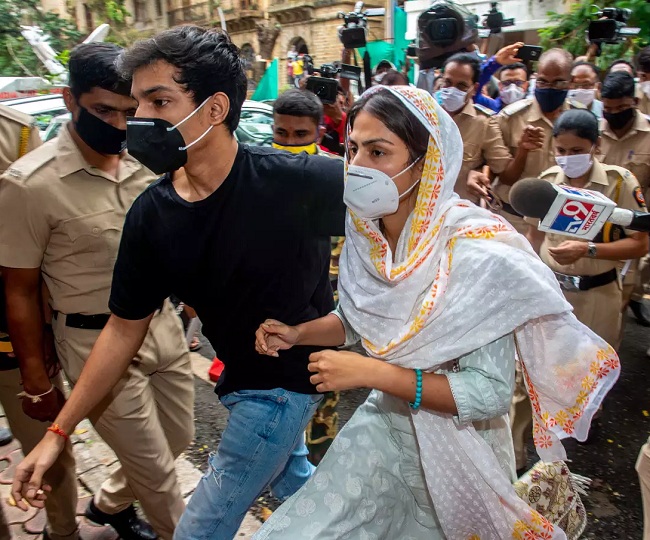 On Thursday Ms Chakraborty, who is the subject of inquiry of three central investigations, told the media about the “unbearable mental torture” of being investigated by multiple agencies

Mumbai: Actor Rhea Chakraborty, who was questioned by the CBI yesterday for over 10 hours in connection with the Sushant Singh Rajput case, is to be questioned again today.

She had been scheduled to appear at 10.30 AM but has sought time from the central agency because a crowd of media persons has blocked the gates to her residence. The actor has asked for help from Mumbai Police and is waiting for the cops to provide an escort.

Ms Chakraborty, 28, who dated Mr Rajput, 34, for a year and left his home on June 8, six days before he was found dead, was asked 10 key questions on Friday, including details of her relationships with Mr Rajput and his family, why she left Mr Rajput’s house and if she had any contact with him after she left.

The CBI (Central Bureau of Investigation), which took over the case following an order from the Supreme Court, is investigating allegations by Mr Rajput’s family that Ms Chakraborty and her family mentally harassed the actor, took money from him and had a possible role in his death in June.

On Thursday Ms Chakraborty told the media about the “unbearable mental torture” of being investigated by multiple agencies; the actor is currently the subject of at least three separate inquiries – by the CBI, the Enforcement Directorate (ED) and the Narcotics Control Bureau (NCB).

The ED is looking into “suspicious financial transactions” involving crores of rupees, while the NCB is looking into drugs-related allegations based on WhatsApp chats retrieved from Ms Chakraborty’s phone.

Ms Chakraborty has denied all charges, describing as “pathetic” allegations from Mr Rajput’s father that she poisoned his son and that she stole money from him.

“It is extremely hurtful from someone (Sushant’s father) going through a loss this big. I loved his son, looked after him. At least have humanity. If not for me, for him,” she told NDTV on Thursday. Mr Rajput’s father had filed a case against Ms Chakraborty with police in Bihar’s Patna, alleging she had a hand in his son’s death.

Ms Chakraborty has also denied any connection to drugs (she claimed Mr Rajput, however, consumed marijuana and that she was trying to wean him off) and said “never took a single rupee” from the late actor.

She also attempted to turn the tables on Mr Rajput’s family, who have targeted her persistently since the case began, pointing out that it was his sister and not she who was with the actor that week and asking: “If he was unwell, why did she leave?”

Also on Thursday Ms Chakraborty revealed the strain she and her family were under; she said her family’s mental health was “being destroyed”.

“It is really difficult. My entire family is going through scrutiny. There’s a mob outside my gate. My dad, the watchmen, people in the building. What are you doing to my family? Why can’t you wait for results? We have faith in the system,” she said.

She also posted a video on Instagram showing her father being mobbed and chased by media persons outside their house in Mumbai. Ms Chakraborty described the mob and media as “a threat to her life”.

After her appeal for protection, policemen were seen outside the actor’s home.