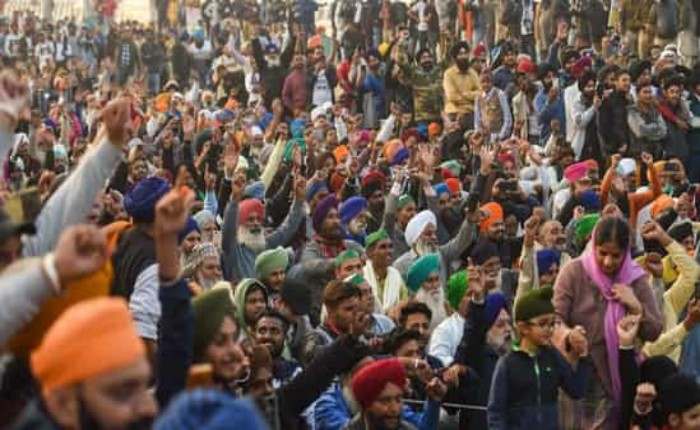 The farmers are expected to meet the police officials in Delhi on Thursday over their proposed tractor rally on Republic Day. This will be the second meeting over the issue in two days.

On Wednesday, officers of Delhi, Uttar Pradesh and Haryana police had met the farmer unions to discuss the route and arrangements of the proposed rally on January 26. The cops suggested an alternate route, but the farmers rejected it.

According to news, farmer leaders were given the option to take out their rally on the Kundli–Manesar–Palwal (KMP) Expressway, but they did not agree.

They want to take out the rally on the Outer Ring Road which passes through several areas of Delhi such as Vikaspuri, Janakpuri, Uttam Nagar, Burari Peeragarhi and Pitampura. The farmer unions said their preparations are in full swing and authorities should facilitate the “peaceful march”, instead of stopping it.

The rally has been opposed by the Centre and the police. The Centre filed a petition in the Supreme Court through Delhi Police seeking an injunction against the proposed tractor or trolley march or any other kind of protest, which seeks to disrupt the gathering and celebrations of the Republic Day on January 26.

The Centre has said the right to protest can never include “maligning the nation globally”.

However, the top court turned down the plea, saying the matter must be decided by the police. The bench headed by Chief Justice of India (CJI), SA Bobde, said police have the authority to deal with the issues pertaining to the proposed tractor rally.

The farmers have been protesting near Delhi for nearly 60 days against the three farm laws passed by Parliament. The proposed tractor rally is against the Farmers (Empowerment and Protection) Agreement of Price Assurance and Farm Services Act, 2020; the Farmers Produce Trade and Commerce (Promotion and Facilitation) Act, 2020; and the Essential Commodities (Amendment) Act 2020.

Enacted in September last year, the three laws have been projected by the Centre as major reforms in the agriculture sector that will remove middlemen and allow farmers to sell their produce anywhere in the country.

However, the protesting farmers have expressed their apprehension that the new laws would pave the way for eliminating the safety cushion of the MSP and do away with the “mandi” (wholesale market) system, leaving them at the mercy of big corporates.

Ten rounds of talks have taken place till now over the issue. While the farmers want the government to repeal the three laws, the Centre has proposed to suspend three contentious agricultural laws for one-and-a-half years. The step back came during the tenth round of talks on Wednesday. The farmers said they will discuss the government’s offer on January 21, and make their stand clear when the next round of talks takes place on January 22.

“Delhi Will Bid For The 2048 Olympics”: Arvind Kejriwal