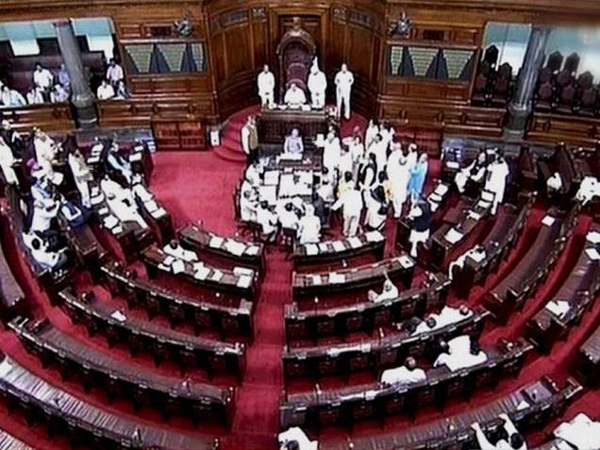 Amid scenes of fierce verbal clashes, as the debate  on demonetization  having descended into apology seeking  politics , Rajya Sabha was adjourned, while Lok Sabha was  adjourned till  Monday as the ruling BJP and Opposition continued to disagree on the nature of the debate.

Rajya Sabha erupted in sloganeering and counter- sloganeering  as the BJP members stood on their feet demanding an apology from  leader of opposition Ghulam Nabi Azad  for his remarks  in condemning the Modi government for having brought a policy, execution of which has led to 47 deaths , standing in queues  to exchange their old high value denomination notes with the new notes,  farmers and small traders having committed suicide akin to death of 19 soldiers at Uri army base in  September by  Pakistan sponsored terrorists.

Information and Broadcasting Minister M Venkiah Nadu  called these remarks as “ anti national”  as these amounted to “ trivializing sacrifices of  soldiers,” and equating demonetization  with Pak sponsored terrorism . “ Azad should apologize for his highly deplorable remarks.”

However, Azad asked  PM Modi to “ apologize “ for having  caused death of 47 people with his anti-people measure of demonetization without applying mind and taking into consideration  the sufferings that he has heaped on the  people.

His colleague  Digvijey Singh wanted to know,” what was wrong in Azad’s statement. Isn’t it a monetary terrorism  on the large number of people of  India” and  asked BJP members to “ stop politicizing the issue and   making it a patriotism versus anti-nationalism”

“ Who could be more nationalist than Ghulam Nabi Azad who survived 29  attempts on his life during  his  tenure as Chief  Minister of Jammu and Kashmir , before and after that,” Singh said.

As the clashes refused to die down, the chairman adjourned the House.