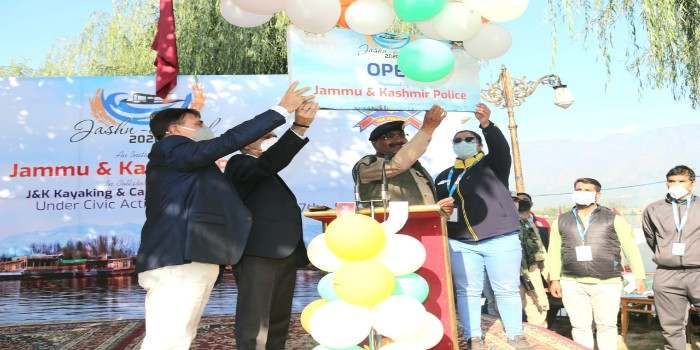 Director General of Police J&K Shri Dilbag Singh declared open a 3-day water Sports festival Jashan-e-Dal and Shikara Race at a function held at Nehru Park, this afternoon. The event is being organized by Jammu and Kashmir Police under its Civic Action Progrmme while following due COVID protocols.

DGP while speaking on the occasion said that the event is being organized after three years. He appreciated the efforts of organizing committee headed by ADGP Armed J&K, Shri A.K Choudhary for organizing the event despite COVID-19. He said that the department is always eager to organize such events with an aim to provide platform to the youth of Jammu and Kashmir to prove their talent.

He said J&K Police besides its professional responsibilities is always there to guide and help our youth to excel in different sports. The DGP also appreciated the efforts of Ms. Bilkees Mir Director of the event for promoting the water sports in Jammu and Kashmir.

While paying homage to the martyr constable Altaf Hussain who gave supreme sacrifice last evening in Nunar, Ganderbal the DGP said that we lost a brave and courageous Jawan who did his duty till last breath of his life. He said that J&K Police is proud that gallant and courageous constable Altaf Hussain gave befitting reply without caring for his life and attained martyrdom after killing the terrorist and added that whole police department expressed our condolences to the bereaved family. He said that J&K Police will ensure all possible help and assistance to the martyr’s family.  He thanked local and national government for taking keen interest in the welfare of families of martyred Police personnel. He dedicated the event to the brave martyr Shri Altaf Hussain.

Later, speaking to the media, the DGP said this event has been one of the favorite events as for the celebration of the beautiful water bodies is concerned. He said that somehow there was some break for some time but despite the COVID we thought this is the time to get young players who are interested in water sports to showcase their skills. He said that this year about 200 boys and girls would be participating in different categories of water sports.

Referring to the scarifies of J&K Police personnel,  the DGP said that it always has been our effort that sacrifices of our brave men are recognized at all levels and added that he is proud of the JKP and is privileged to lead this force which have received largest number of gallantry medals ever,  in the last two years.

He said that this event is well placed in our sports calander. About 200 participants will compete in Shikara Race, Dem Boat Race, Dragon Boat Race, Kayaking and Canoeing, Water Polo and Swimming. He said that besides policing responsibilities, J&K Police has remained on forefront in organizing different sports and cultural activities across J&K for our youth so that they can excel in different fields.

Commandant IRP 8th Bn. who is the Organising Secretary thanked the Chief Guest, Civil and Police Officers, participants and media for making the event a success.