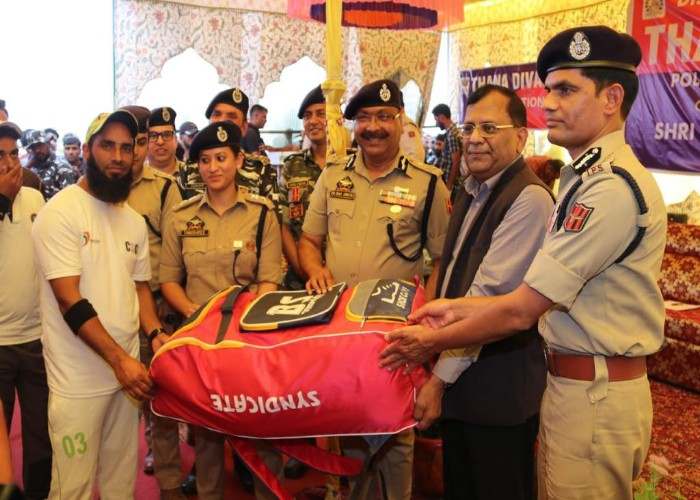 Time to work together in strengthening the prevailing peace to build better future: DGP

No religion teaches murder of humanity and killing of innocent people. Denouncing terrorism we all have to work jointly to stop those who are against the peace, brotherhood and harmony. This was stated by the Director General of Police J&K Dilbag Singh who alongwith Financial Commissioner (Additional Chief Secretary) Home Department J&K, R K Goyal presided over a function of Thana Diwas organised at Zainapora Police Station in District Shopian.

Speaking on the occasion the DGP said that the youth who have traveled to different parts of the country would know the vastness of flora & fauna of the country adding that our country is unique in nature in which people of different faiths, castes, colours are living together. He said that the youth of Jammu and Kashmir over the past three decades have witnessed destruction of life & property adding that it’s time to forget the past and work together in strengthening the prevailing peace to build a better future. Referring to the innocent killings the DGP said no religion teaches murder of humanity, killing of innocent people adding that we have to work jointly to stop those who are against the peace, brotherhood and harmony.

The DGP said that Pakistan has been sending weapons to drag our youth on the path of destruction adding that with intensified efforts and strong response of J&K Police and CAPFs coupled with rejection by the youth, it is now pushing drugs to harm our younger generation. He said that we have to stand and work mutually to stop this trend too for better tomorrow. He said that J&K Police under its social responsibility is running Drug-de-Addictions Centers to help the drug affected persons.

He assured favourable action on all the grievances put forth by the participants during the interaction. He directed SP Shopian to organise a special guidance/counseling camp for the aspirants of UPSC. He also said that J&K Police would ensure to guide the youth in different sports activities. Referring to the opening of new cinema halls in Shopian, Pulwama and Srinagar, the DGP said that the means of entertainment are meant to enjoy good times and have peace.

In his address the Financial Commissioner (Additional Chief Secretary) Home Department J&K R K Goyal expressed his pleasure to visit the place and interact with the people. We have all come to listen to you adding that thana diwas is an initiative taken under the directions of Lt. Governor J&K Manoj Sinha to extend Police services to the people of J&K. Thana Diwas is a medium to come more close to the general people, he said and since its launch it has been organised in all the districts of UT continuously this year. On Thana Diwas and Block Diwas officers of different departments come more nearer to the general public and listen to their grievances.

He said that Nasha Mukhti Abhiyan is going on to eradicate the drug menace as well to aware people especially youth against the ill effects of drugs. We have to take action against all those involved in drug peddling and its trade, he added. He said that I have listened and noted the issues raised adding that issues and the grievances raised by the people would be looked into.

At the conclusion of the function the DGP & Home Secretary felicitated the sports personalities with certificates who have brought laurels to the district and UT in different sporting fields.

Speaking to the media the DGP said that some elements are disturbed by witnessing growing peace in Jammu and Kashmir and are making attempts to disturb it adding that besides J&K Police, and other security forces, it’s the responsibility of the people to consolidate this peace further. He said that across the border terrorist training camps/ launch pads are still active. Infiltration attempts were made from LoC and IB, J&K Police and security forces have tracked down many of these infiltrators, he added. He said that during the current year around three dozen Pakistani terrorists affiliated with JeM & LeT were neutralized which indicated involvement of Pakistan and its agencies in fomenting trouble in Jammu and Kashmir adding that Police, Security forces and the people of J&K would continue to work together to foil their evil intentions and further strengthen the peace. I think before winter sets in some more infiltration bids would be attempted, he said. The DGP said that every visitor who goes back from here has a different opinion as he is all praise for the people, tourist industry and the way they are being conducted by the administration and security forces.