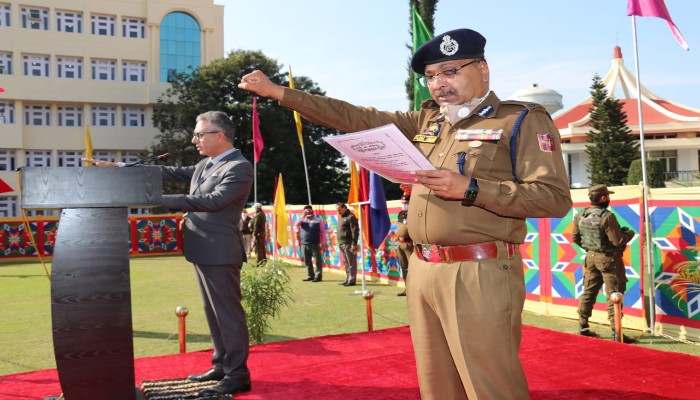 To Celebrate Constitution Day, also known as Samvidhan Divas, an impressive function was organized in the premises of Police Headquarters J&K here today morning. The function was presided over by the Director General of Police Dilbag Singh, while ADGP Hqrs. A. G. Mir read out the Preamble of Constitution of India.

The DGP while speaking on the occasion said that after long years of struggle and huge sacrifices the independence of the country was achieved from under the subjugation of foreign rule . He said that after the independence the constitution of India came into existence after a lot of hard work by the well known figures and leaders of our country who prepared one of the most elaborate and celebrated constitution after analysing constitutions of different democratic nations and on this day it was dedicated to the people of democratic India.

The DGP said that preamble of our constitution sets the spirit of the constitutional ideals desired to be achieved by all the institutions of of Indian Democracy and the people of our nation. He said that this day has an immense historical importance for all of us and today we rededicate ourselves to those great ideals and the spirit of our constitution as we celebrate 71th anniversary of this great historic event. The DGP said as responsible members of the force we have supreme responsibility on our shoulders to protect and uphold the constitution. He said that today we are taking the pledge to rededicate ourselves for the service of Nation.

The ADGP Headquarter, PHQ A. G Mir readout the Preamble of the Constitution which was followed by the officers and Jawans.

Meanwhile the Jammu Kashmir Police celebrated the day at all District, Unit and wing headquarters where the concerned police heads led the police officers and Jawans in pledge taking ceremony.