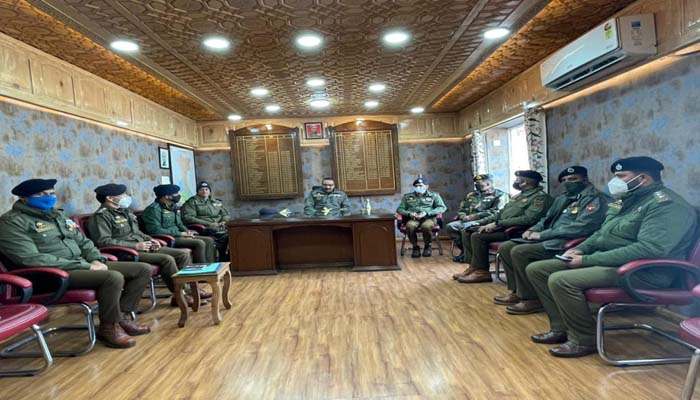 On the onset of the meeting, the DGP complimented the police and security forces for their untiring efforts while eliminating the dreaded top terrorist commanders in the recent times thus providing huge respite to the common people. He praised the police and security forces for successful anti-militancy operations in their respective areas. He said that the killing of Al Badr, LeT and JeM commanders will definitely help in saving the lives of commoners as also the lives and careers of number of our innocent youth who fall prey to their malicious designs.

He lauded the role of J&K Police and other security forces for recovering and capturing huge numbers of weaponry during the last year. He said that capturing weapons means nipping the evil in the bud and saving a number of youth who would have been misguided to pick up those weapons by choosing a path of violence. The DGP said that the public in general and parents of vulnerable youth have reposed trust in us. He impressed upon the officers to work with full professionalism and with more dedication for bringing lasting peace in the area and welfare of the people.

The DGP impressed upon the officers, to workout strategies to strive harder to maintain peace and order in Jammu Kashmir. He said that inimical to peace here and terror sponsors across the border are unhappy with the peace prevailing in J&K and are hell bent to disturb law & order by one way or other. He said that J&K Police along with other security forces has got successes across Jammu and Kashmir against the terrorists and our well coordinated actions would continue to ensure long-lasting peace in Jammu and Kashmir.

The DGP emphasized that the police personnel must deal strictly with elements involved in the radicalization of youth and pushing them towards terrorism. He directed the police officers to identify and book the persons involved in these activities. He directed that forces should remain more vigilant against the activities of OGW network who are helping terrorists to carry out their nefarious designs.

The DGP stressed upon the officers to strengthen the highway security grid. He said that Jammu and Kashmir Police along with other security agencies are fighting on multiple fronts and need of the hour is to strengthen and augment the highway security grid. He said that anti-national elements are always looking for the loopholes and their motive to disturb the peace has to be dealt with firmly.