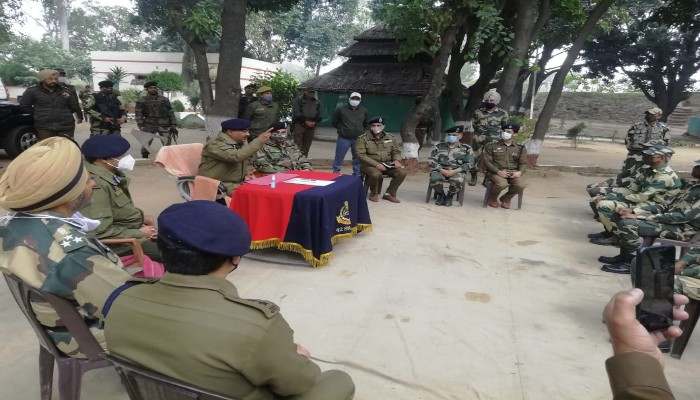 Says joint efforts must to achieve desired and bigger results

The DGP first visited BSF 42 Bn post Budwar where he presented rewards to the BSF personnel who were part of the operation in which a huge consignment of drugs were recovered in September.

Speaking on the occasion, the DGP appreciated the efforts of the personnel involved in that operation and said that busting of this drug racket had given a big jolt to the ugly and nefarious design of Pakistan. He said that Pakistan is using drones to drop weapons in our part and added that forces need to be very alert to foil this evil design as well. He said that with the collective efforts and greater the synergy between Jammu and Kashmir Police and BSF, a cross-border tunnel was detected in Samba and added that joint efforts are must to achieve desired and notable results in the future.

The DGP then visited Police Post Sai where he took stock of the working of the police station. He while interacting with the police personnel instructed them to discharge their duties with utmost dedication and honesty in reducing the crimes. He stressed upon them to be more alert and expose the elements, involved in the drug trade and other crimes in the border area. He directed them to act strongly against drug trade and people involved in it. The police and BSF officers briefed the DGP during his visit to these posts.

It needs to be mentioned that a couple of days ago DGP J&K Shri Dilbg Singh alongwith the Shri Sh. Mukesh Singh, IGP BSF Shri N.S Jamwal visited Regaal, Samba where he patted the Deputy Commandant Shri Deepak Rana of BSF 48 Bn and rewarded the BSF party for detecting the cross border Tunnel.