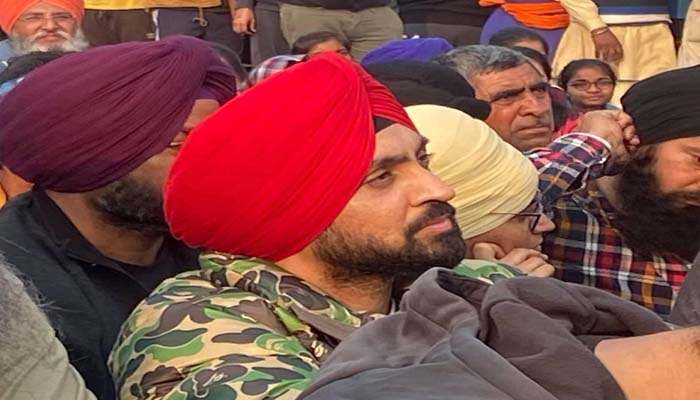 After extending his support to the cause of the protesting farmers on social media, which led to an ugly spat with actor Kangana Ranaut, singer and actor Diljit Dosanjh on Saturday joined the farmers’ protest at Singhu border and addresses the protesters from the stage. “We have only one request to Centre..please fulfil the demands of our farmers. Everyone is sitting here peacefully and entire country is with farmers,” Diljit said. Diljit’s presence at the gathering was a surprise as Delhi Police said they had no prior information on Diljit as he came to the site from Haryana.

The protesting farmers earlier decided that they would not allow any politicians to speak from their platform.

Lauding the farmers for embarking on this ‘Dilli Chalo’ protest amid freezing cold, police resistance, the singer said, “farmers have created a new history. This history would be narrated to future generations. Farmers’ issues should not be diverted by anyone.”

Diljit’s visit to the Singhu border comes as the crucial talks between the farmer union leaders and the Centreal ministers are going on at Vigyan Bhawan. The overall protest against the three farm laws that the farmers fear will coporatise farming has gathered steam on Saturday as farmers from Bilaspur, Uttarakhand reached UP-Delhi border.

The Centre has reiterated that it is open to address all concerns raised by the farmers. The union leaders too are stern on their point that they won’t settle for anything short of the withdrawal of the laws. They have made it clear that they don’t want any amendment.

Farmers on Friday announced a ‘Bharat Bandh’ on December 8 and threatened to intensify their agitation and block more roads leading to the national capital if the government does not accept their demands.