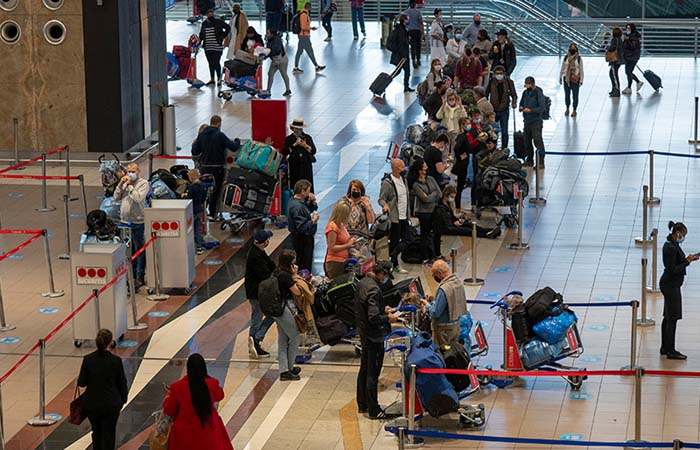 Dutch health authorities said that dozens of people who arrived in Amsterdam on two flights from South Africa on Friday are likely infected with COVID-19, and they are conducting further testing to see if people are infected with the recently discovered Omicron coronavirus variant.

Around 600 passengers arrived at Amsterdam’s Schiphol Airport on the two KLM flights on Friday and then faced hours of delays and testing due to concerns over the new virus variant. On the basis of initial testing, the Dutch health ministry estimated there may be around 85 positive cases among the passengers.

“Travelers with a positive test result will be placed in isolation at a hotel at or near Schiphol,” health authorities said in a statement.

“Of the positive test results, we are researching as quickly as possible whether they are the new variant of concern, now named ‘Omicron’.”

The Dutch government banned all air travel from southern Africa early on Friday. Health Minister Hugo de Jonge said that passengers already en route to the Netherlands would have to undergo testing and quarantine upon arrival.

Passengers on the two KLM flights, from Cape Town and Johannesburg, said they were kept waiting on the tarmac for hours.

“Vigorous applause because there is a BUS that has come to take us … somewhere,” tweeted New York Times journalist Stephanie Nolen, a passenger on the flight from Johannesburg.

“Bus to a hall to a huge queue. I can see COVID testers in bright blue PPE far on the distance. Still no snacks for the sad babies,” she added in a second tweet.

A spokesperson for the health authorities in Kennemerland, the Dutch region that oversees Schiphol, said the positive cases were being analysed by a Dutch academic medical hospital to determine whether they are the new strain.

The Dutch government separately on Friday announced the nighttime closure of bars, restaurants and most stores as it grapples with a record-breaking wave of COVID-19 cases that is swamping its healthcare system.