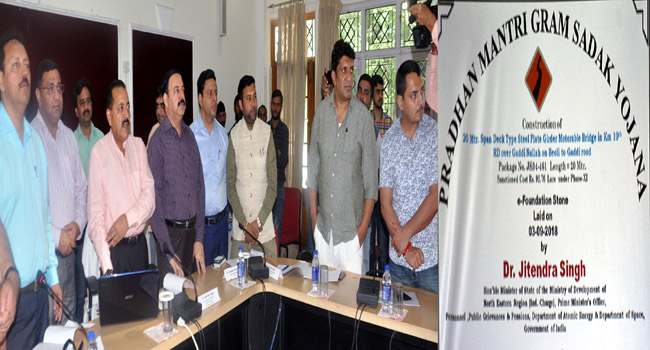 Calls on stakeholders to work towards development

In his address, Dr Jitendra Singh called for coordinated efforts by all stakeholders towards achieving the common goal of development.

He said that the Prime Minister is sensitive towards J&K and the Government of India is striking a perfect balance through equitable distribution of development works and funds. Liberal funding has been made for the deserving areas, he added.

Dr Singh said that he has been shouldered with dual responsibilities of Eastern Region and his Parliamentary constituency and both are facing same issues of topography, connectivity and communication and resolute efforts being made to resolve the same.

He asked the concerned functionaries and the executing agencies to adopt the work culture for not holding up the developmental works for the formal inaugural ceremonies and directed for taking up the left-over areas.

Highlighting several ongoing development projects in his constituency, Dr Singh informed that in Kathua, 6 bridges will be dedicated to the people by March 2019.Hydro Electric projects in Kishtwar will make entire region power surplus, Dr Singh said, adding that, development of Sanasar road was approved under CRF. He further informed that the Radio station in Udhampur will start functioning by December.

Dr Singh said that around Rs 1 cr worth roads were constructed in Basohli and work on toilet complex near Atal Setu Bridge has been initiated and food stalls will be developed soon for the convenience of the tourists.

Dr Jitendra Singh also sought a detailed report on the progress made under PMGSY and asked the concerned functionaries to speed up the pace and entrusted upon the officers to increase the per day average target length. He directed for time bound completion of the all the works taken up under PMGSY besides maintaining quality standards.

Chief Engineer PMGSY informed that the target of 1000 km length roads upto Phase-IX is set for completion by the end of this year.

MLAs also informed Dr Jitendra Singh about the PMGSY roads facing issues like forest clearance, compensations in their respective constituencies. While discussing the issues pertaining to BRO, CRF and NABARD roads Dr Singh asked the Div Com to conduct a meeting with the concerned functionaries to review BRO roads and further assured the MLAs that all their genuine concerns will be taken up.