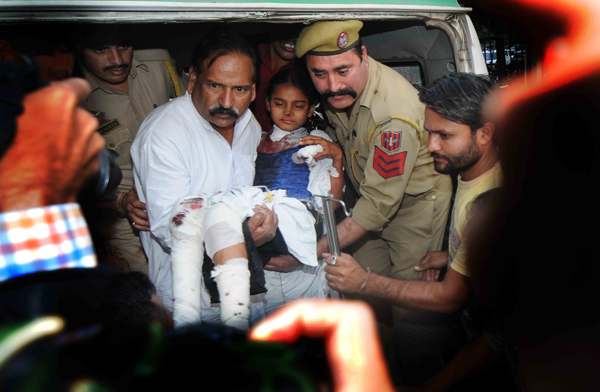 Six members of a family of Suchetgarh village and two others were injured when mortar fell near their houses during heavy firing and shelling that resumed today afternoon in at least three villages of RS Pura sector today.

The injured who were given first aid in RS Pura hospital are being shifted to Government Medical College Hospital. There are two children among the injured and five women.

According to sources, “Mortar shells from Pakistan fell deep inside Indian territory.” The villagers from Suchetgarh and adjoining areas are most affected.

There is enormous fear among the border resident who say,”The civil administration is doing nothing for us.”

According to BSF sources, “The villages affected are Abdullian, Chandu Chak and Layian.”

They say this is for first time in recent past that such heavy shelling of 82 mm mortars are being fired along with other weapons during the day time.

The BSF has asked people not to go out in the fields and take shelters in the bunkers. According to reports some villages in Kanachak sector are being evacuated.

Senior BSF official are taking stock of the situation and formulating strategies to counter.