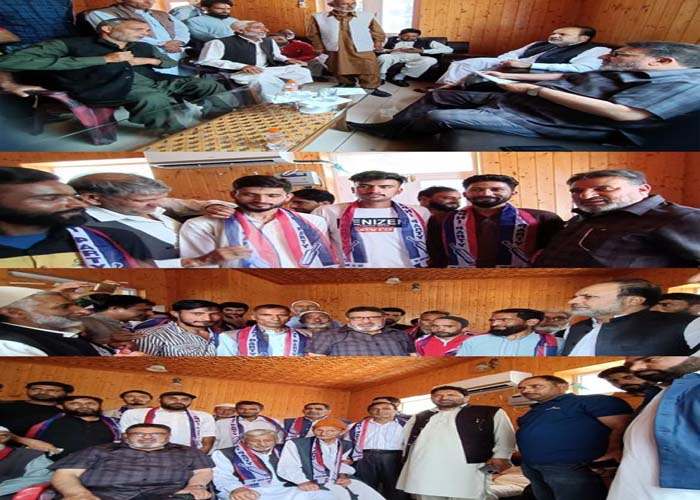 Says, people and political activists are fed up with deceitful politics and fake promises of the conventional parties

On the second consecutive day, more leaders and activists from traditional political parties made their entry into the Apni Party’s fold in Uri region of north Kashmir’s Baramulla district on Friday.

Party President Syed Mohammad Altaf Bukhari, who is on his two-day visit to Uri gave a warm welcome to the new entrants into the party fold.

According to a statement issued here, many groups and individuals from traditional political parties such as National Conference (NC), Peoples Democratic Party (PDP), and Peoples Conference (PC) joined Apni Party on Friday in an exciting event organized at the Rest House in Bandi Uri, where Syed Mohammad Altaf Bukhari greeted the new entrants into the party fold.

On this occasion, he said, “It is heart-warming to see that people, especially the political leaders and workers, have been realizing the fact that Apni Party is the only party in J&K that holds an unambiguous and practicable agenda. Our clear-cut agenda attracts people to join our hands in every part of the Union Territory (UT).”

He added, “I know that you have faith in the Apni Party’s vision, and I assure you that I will not disappoint you.  Together, we will strive for a peaceful, prosperous, and developed Jammu and Kashmir, and continue our endeavour to get people’s political and economic rights restored.”

Apni Party leaders advised new entrants to boost their political activities to serve the people in their respective areas.

He said, “You must be out there to serve the people and I assure you that while you would be doing so, the party leadership will be behind you like a rock. Our only purpose is to serve J&K people, who have been grappling with the situation caused by the long period of conflict and bloodshed.”

He added, “Not only that people have been facing miseries due to the enduring strife here, but they also are dejected with the deceitful politics of the conventional political parties and their leaders. They have been desperately looking for someone who does not mislead them further. And here comes the role of the Apni Party. We are committed to a truthful politics that will fetch a prosperous future for the people.”

Reiterating Apni Party’s program, Syed Altaf Bukhari said, “Apni Party is working for sustained peace, durable prosperity, and the development of Jammu and Kashmir with the political and economic empowerment of its people.”

Pertinently, Apni Party leader Syed Mohammad Altaf Bukhari was on his two-day tour to Uri. His tour was aimed to gauge the present political scenario and assess the public issues in this border region. Large groups and individuals from various political parties and panchayat bodies including Congress leader Abdul Qayoom Pathan and Raja Mukhtar Khan, who has been associated with the National Conference for the past 40 years joined the party even on the arrival of Bukhari to the Uri on Thursday.