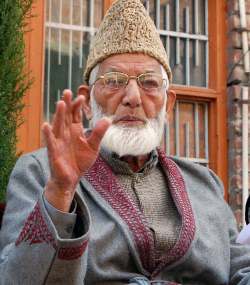 Srinagar, 03 Oct:
While condemning the murder of Sarpanch Fayaz Ahmad of Kandizal Kakpora Pulwama by unidentified gunmen, chairman Hurriyat (G) Syed Ali Geelani said that, it is un-Islamic and inhuman to kill any unarmed person without any proper reason and this is unjustified.

The militants escaped after killing   Bhat on the spot.

He was the only brother of three sisters and sole bread earner for the family.

Police said that the militants came on motor cycle  and barged into his brick and cement house and showered bullets on him from the point blank range, and within minutes disappeared from the crime scene.

This is the first such killing in the recent days, despite the fact that the National Conference is shielding and defending the current disturbances in the Valley. The violent disturbances and security forces actions have claimed more than 80 lives in the past three months.]

Police claimed that it has registered a case and started looking into the  matter.